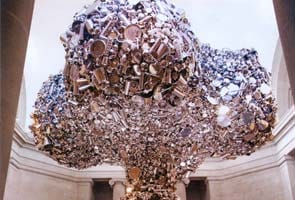 New Delhi: The diversity of new media art in India added yet another feather to its cap with the official unveiling of "Line of Control", a monumental steel sculpture, by the country's leading contemporary artist Subodh Gupta at the South Court Mall in Saket in the capital on Friday.

It is made of stainless steel kitchen utensils and culinary equipment like plates, bowls, ladles, spoons, tiffin boxes, sieves and saucers. These objects have been the core of Mr Gupta's deviant art practice since 1989 when he first exhibited stainless steel sculptures.

"The sculpture - a public art installation - is shaped like a giant mushroom cloud with a base, symbolising the troubled borders and times we live in - and also redemption," Subodh Gupta said.

Described by critics as one of Mr Gupta's largest works, the installation was brought back to India from London by the Kiran Nadar Museum of Art. It measures 36 X 36 ft and weighs 20 tonnes.

"The 'Line of Control' stereotypically brings to mind geo-political crisis but I have used it as a poetic metaphor to transgress and subvert the known meaning and wittily present a cloudburst of another kind - of prosperity, peace and harmony," Mr Gupta said.

"I love cooking and I spend a lot of time in the kitchen. The stainless steel utensils are so shining and so bright - it symbolises the brightness and the emptiness of a shining India," Mr Gupta said.

Mr Gupta, who has experimented with mediums, has worked with cowdung cakes as well.

Inaugurating the installation, Kiran Nadar, owner of the Kiran Nadar Museum, said "I was overwhelmed by the installation when I first saw it at the Tate Triennale in London in 2009. Tate is a grandiose kind of building - very cutting-edge. It looked like a mushroom cloud invoking memories of Hiroshima and the nuclear bomb."

Mr Nadar said one of her objectives was to make it accessible to common people.

The equipment arrived in India in four containers and required a team of people to assemble. The steel equipment has been made in Korea and the original installation had been crafted in Beijing before moving to London.

Promoted
Listen to the latest songs, only on JioSaavn.com
"Subodh Gupta's work has a transformative quality and scale that has the power to attract. Central to his art is the practice of art - he has a deviant streak. Subodh Gupta is the first artist to have stepped out of the comfort zone of conventional art to experiment with lesser-known mediums like video. This led him back to the kitchen," art critic and curator Roobina Karode said.

She said, "Mr Gupta's steel utensils dislodges them from their known meanings to reflect the layered economic function of today".

Nearly 18,000 Calls For Ambulances In A Week Over Covid: Delhi Government Data