A total of 43 per cent turnout was recorded in the DUSU elections. New Delhi: The counting of votes for the Delhi University Students Union (DUSU) elections began today at a community hall near Kingsway Camp in New Delhi amid tight security. The main contestants for the DUSU presidential post were ABVP's Rajat Choudhary, NSUI's Rocky Tusheed, AISA's Parul Chauha, independent candidates Raja Choudury and Alka. There were 126 ballot boxes for the DUSU panel and eight were taken for counting in each round. As per reports in PTI, there was a feeble turnout of voters for the Students Union elections in Delhi University with only about 43% students turning up to cast their votes. The National Students' Union of India (NSUI) has won the presidential polls and Akhil Bharatiya Vidyarthi Parishad (ABVP) got secretary.
Sep 13, 2017 16:19 (IST)
Congress-backed NSUI claims it won 3 not 2 seats in Delhi University student polls, to go to High Court against result.
Sep 13, 2017 15:11 (IST)
BJP-affiliated Akhil Bhartiya Vidyarthi Parishad (ABVP), which has a stronghold in DUSU, bagged two seats, that of the joint secretary and the general secretary.
Sep 13, 2017 15:11 (IST)
Sep 13, 2017 14:42 (IST)
Congress-backed NSUI makes comeback in DUSU election, bags 2 of 4 posts, including the president's, say Delhi University officials. 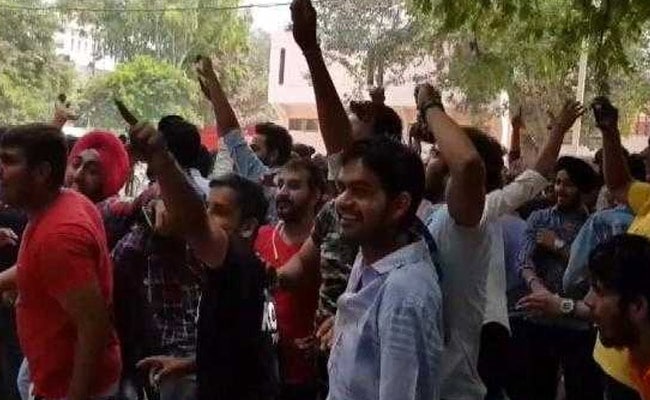 Sep 13, 2017 14:29 (IST)
NSUI confirmed it's victory on the official twitter handle. They tweeted ' A major comeback for us in #DUSU2017, students of DU have given us a huge responsibility to fight for their rights.'

'This mandate is a clear indication that student fraternity have restored their faith in @INCIndia & our beloved leader Sh.@OfficeOfRG'

'Also this mandate shows that students throughout the country have rejected the poisonous & divisive ideology of RSS. '

'Finally this victory belongs to evry NSUI activist who hv worked tirelessly in DU,specially our mentors @girishgoa,@guptar &@Fairoz_JK'
Sep 13, 2017 14:26 (IST)
As per reports, A total of 43 per cent voter turnout was recorded.
Sep 13, 2017 14:25 (IST)
The National Students' Union of India (NSUI) has won the presidential polls and Akhil Bharatiya Vidyarthi Parishad (ABVP) got secretary.