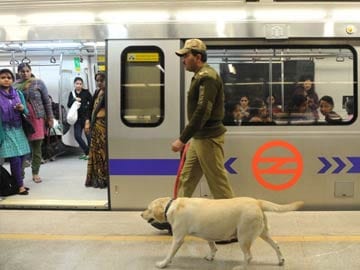 New Delhi: Delhi Metro commuters faced a tough time on Tuesday morning as a snag hit the Blue Line from Dwarka Sector-21 to Noida City Centre/Vaishali, causing trains to run slow and halt for long at many stations, resulting in overcrowding, officials said.

"Train services on line-three (Blue Line) are affected since 10.20 a.m. due to a problem in the overhead electrical wire (OHE). Trains on this line are running in two loops from Kirti Nagar to Dwarka and Subhash Nagar to Noida/Vaishali," a Delhi Metro official said.

He added that single line service is available between Kirti Nagar and Subhash Nagar stations.

"Announcements were also being made at Noida Sector-15 station suggesting those commuters in hurry to opt for other means of transportation," a Metro user said.

Promoted
Listen to the latest songs, only on JioSaavn.com
According to commuters, the trains were halting for longer than usual and many passengers got off mid-way.

Vandita Jain, 19, travelling from Rohini to Jhandewalan told IANS: "The train stopped for close to 20 minutes at Rajiv Chowk and it was overflowing with people. Though I had to go to Jhandewalan, I decided to take an auto instead as I was getting late for work."