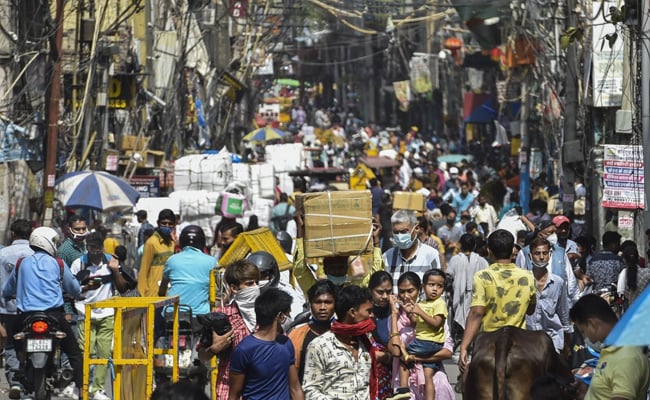 Over 4,300 violations of Covid-safety protocols were reported from Delhi on Wednesday, even as the city scrambles to face a potential avalanche of COVID-19 cases triggered by the Omicron variant.

Data for December 28 shared by the Delhi government showed 4,392 violations were recorded.

83 were for not maintaining social distance and 60 for spitting public places.

On the same day 69 FIRs registered for violation of Covid rules, but no arrests were made.

A staggering Rs 86,33,700 was recovered in fines, the Delhi government said.

Visuals emerged last week of massive crowds at the city's Sarojini Nagar market, where thousands - who had apparently never heard of the coronavirus - were packed shoulder-to-shoulder.

Widespread disregard for the guidelines comes as the national capital is in the initial stages of a surge in Covid cases. Yesterday the city reported 923 - an 86 per cent jump in 24 hours.

There are also 263 Omicron Covid cases in the city - the most of any state or UT.

Delhi is on 'yellow alert' over the rise in Covid (Omicron) cases, with data suggesting the spike in is almost 21 per cent faster than the second wave in March-April.

This means restrictions like night curfew (10 pm to 5 am), closure of educational institutions, cinemas, and gyms, as well as 50 per cent cap on seating capacity of Metro trains and public buses.

Restaurants and bars will close at 10 pm and they too will operate at half capacity.

Private offices will function at 50 per cent capacity (except for essential services) and malls and shops can operate between 10 am and 8 pm on the odd-even basis.

Yesterday the Delhi Disaster Management Authority met and decided not to impose any further restrictions; this will be taken after monitoring occupancy rate of hospital beds.

This morning Delhi Health Minister Satyendar Jain sounded a grim warning - he said the surge in cases in the city suggested the Omicron variant is now spreading through the community.

He said there were 200 Covid patients in hospitals across the city, with another 115 asymptomatic people also admitted as a precautionary move.

Researchers at the United Kingdom's Cambridge University have warned of an "explosive" growth of Omicron cases in India within days, and said it is "hard to predict how high daily cases" could go.

At the peak of the second wave India reported over four lakh new cases per day.