A mattress by the road, no toilet: Chief Minister Arvind Kejriwal's night of protest 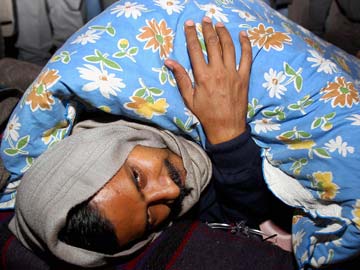 Arvind Kejriwal during his dharna outside Rail Bhavan

New Delhi: Delhi's Chief Minister Arvind Kejriwal slept on the road yesterday, a bitterly cold January night, right next to where his blue Wagon R car was parked near the Railway Ministry, a stone's throw from Parliament House.

The 45-year-old, who has reportedly been unwell and was seen coughing many times during his protest yesterday, tucked himself into a quilt that also doubled as a mattress and then threw on some blankets. (See pics)

He slept before midnight and an invisible cordon of Aam Aadmi Party volunteers kept vigil. If anyone came too close to the sleeping Chief Minister, a volunteer would steer them away. "No camera lights please, it will disturb him," they said to those who wanted a rare picture of a chief minister sleeping on the road in a city he governs.

While Mr Kejriwal rested, AAP volunteers took turns at singing patriotic songs and shouting slogans while waving the national flag. Some engaged in intense discussions on the merits of the protest and the road ahead for them. A small bonfire encouraged more conversation.

AAP's chief spokesperson Yogendra Yadav held discussions with a group, and then at about 2 am, walked up to field questions from reporters. He even made an impromptu speech to those volunteers whom the police had stopped at the barricades and not allowed into the main protest venue.

As it became colder, volunteers reached out for hot tea that was arranged for at one of the barricades.

Mr Kejriwal woke up at 5.20 in the morning, every move captured on camera. With "good morning" out of the way, he fired his first salvo, attacking Home Minister Sushil Kumar Shinde. "How can Home Minister (Sushil Kumar) Shinde sleep when so many crimes are happening in Delhi? Is he a dictator? We won't negotiate, this is not a grocery store," he said. (Watch the video here)

Day 2 had begun, a cold, bleak, grey day. It would rain soon. But Arvind Kejriwal was ready and rearing to go. Clearly, the rough and tumble of the Delhi outdoors had not sapped the energy of the city's chief protester.
Comments
Arvind KejriwalDelhi