How a baby elephant was rescued from water tank 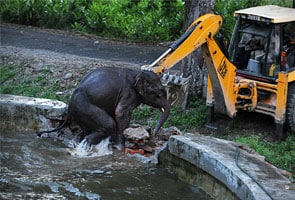 Siliguri: A baby elephant fell into a water tank in West Bengal's Kalimpong area. He was part of a herd of 100 wild elephants who stopped at a reservoir to drink some water on Tuesday. (See Pics)

The elephants surrounded the water tank and trumpeted loudly to attract attention. Then they took off.

The Army was called in but suggested that local forest officials handle the rescue mission.

Promoted
Listen to the latest songs, only on JioSaavn.com
Range officer Bijon Talkudar was in charge. A special machine drained the reservoir of its water; a crane tried to lift the elephant out; and finally, the walls of the tank were demolished.

The baby elephant was not hurt; he has been released into the forest.