Why Chennai Was Flooded. Warnings Were Ignored

Chennai: As Chennai was lashed by rains last week, one of the worst hit was its southern belt. Images of one such water-logged south Chennai neighbourhood, Velachery, became emblematic of a city paralysed - residents wading through waist-high water, boats ferrying children to school and cars stranded on the roads.

The Tamil Nadu government said this was simply because of the intensity of rain which was as high as 265 mm on November 16. It responded promptly, launching relief operations and demanded an immediate relief of Rs 2,000 crore from the Centre.

But Jayshree Venkatecan, an environmentalist with an NGO, Care Earth says this was a man-made disaster. Ms Venkatecan, who studies the ecologically sensitive Pallikaranai marshes near Velachery, showed how the once-50 square kilometres wetland has shrunk to a fraction of its size because of unchecked construction and encroachment of land. She told us that the marsh would have acted as a sponge to soak up rainwater, thus reducing the impact of flooding. 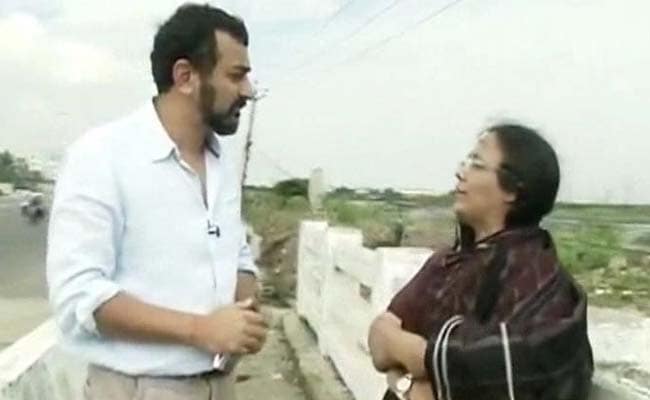 Jayshree Venkatecan, an environmentalist with NGO, Care Earth says the deluge in Chennai was a man-made disaster

Her view was echoed by environmental writer and social activist Nityanand Jayaraman who compared current satellite pictures with those from a decade ago to show the steady shrinking of the marsh. "The marshland has shrunk massively in the last 30 years. It's now about 4.34 square kilometers and is shrinking rapidly," said Mr Jayaraman.

The bio-diverse wetland has seen its area chipped away by both industries - primarily an IT corridor on its western edges - and residential areas on the south and east.

Environmentalists claim that the encroachments into the buffer zones around the marsh have also affected its capacity to act as a natural absorbent of flood waters. "Around 32 wetlands buffer the marsh. These are now part of the IT Corridor," said Ms Venkatecan.

The other big problem is a giant garbage dump - one of south Chennai's two designated dumps - which has grown almost seven times - to 200 acres - its original allocated size, encroaching into the water body and exacerbating the flood situation.

The city's civic body pleaded helplessness, citing nature's fury. "Our role is limited to maintaining civic infrastructure," said city corporation commissioner Vikas Kapur, admitting to poor planning in the suburbs. "This did not happen overnight. But nature has a way of coming back if we don't respect it."

But the state government had been warned against the fallout of rampant construction. A detailed development plan of the city, prepared seven years ago at the government's behest, had warned against building in marshlands, wetlands and low-lying areas. "What happened is we very clearly told them: High rise (construction) to be allowed in certain areas, medium rise in others, low rise in certain areas," said MG Devasahayam, a former bureaucrat who was a consultant for the 2009 report. But the reverse has been taking place, said Mr Devasahayam, with the result that natural drainage has been completely choked.

Ms Venkatecan says that no further development should be allowed in the marshlands. "These 231 sq. kms, where there is an issue of waterlogging, you need to protect it."

But cranes are hard at work at the ELCOT industrial park, not far from the Pallikaranai wetlands, and newer edifices are coming up in the ever-expanding suburbs, as NDTV found out. Lessons have clearly not been learnt from Chennai's deluge.

Muslim Couple Gets Married At Anti-CAA Protest In Chennai