Excerpt: Modi And Advani's Division Of Labour And Role Play 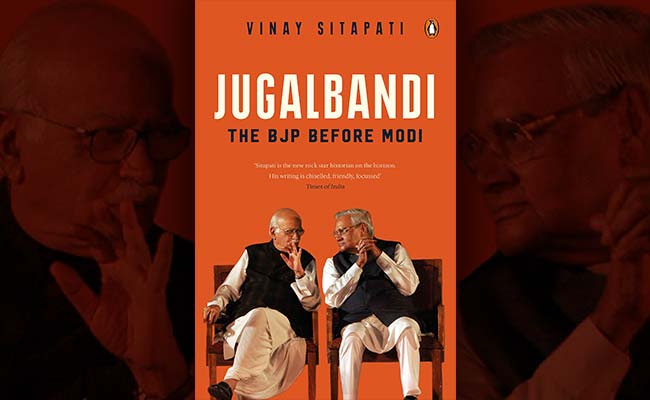 Cover of Vinay Sitapati's book 'Jugalbandi: The BJP Before Modi'

Atal Bihari Vajpayee was an orator, a trait he learnt from his father and honed when he was selected for public relations roles by Deendayal Upadhyaya. Though a middle-rung poet, he sensed not just the structure of sentences but their rhythms. Add to this his extended presence in parliament, where he was almost always the leader of his party. Vajpayee endured by being the most hypnotic political speaker independent India has produced.

If you wear a mask long enough, the mask becomes your face. What parliament did to Vajpayee was to teach him the Nehruvian version of India. It was one which respected India's public institutions, endeavoured to keep Hinduism out of government, was sensitive to the trauma of post-partition Muslims, wanted state control over the economy and veered away from the West on foreign policy. Vajpayee initially followed all of this-not out of love for Nehru (as his right-wing critics alleged), but out of love for the parliament of that period.

Vajpayee's politics was also shaped by the woman in his life. Rajkumari Kaul socialized the provincial Hindu. Their many conversations, most tellingly on Ayodhya, would alter Vajpayee's mind.

This Nehruvian outlook was at odds with the Rashtriya Swayamsevak Sangh. Vajpayee eased this tension in three ways. First, he convinced the RSS that to win elections it needed him to attract the non-Congress opposition as well as the moderate Hindu majority. Second, while he cultivated a liberal air, he was ultimately a party man. On supporting the Ayodhya movement or Modi's continuance as Gujarat chief minister, Vajpayee was torn between principle and party. But his instinct for self-preservation meant that he always chose party. Always.

The third, most striking way, in which Vajpayee was able to balance his liberal demeanour with Hindu nationalist ideology was in his choice of partner.

As we have read, Partition had transformed the English-speaking, tennis-playing Lal Krishna Advani into a grassroots mobilizer, determined to reunite India again. His knack for organizing was made sharp by his decade as a pracharak in Rajasthan. By the time he entered Delhi as secretary to Vajpayee in 1957, Advani's personality had been formed-an eye for detail, a head for the RSS and his heart set on his new boss.

Vajpayee and Advani's relationship since then was held together by love-for each other and for Bollywood films. But it was also based on a division of labour that Hindu nationalism required. On the one hand, the party needed to take its core voter and motivated cadre along. To keep the base, it needed a stern visage. On the other hand, accusations stemming from Gandhi's murder in 1948 had made the ideology untouchable. To come to power, it needed a calming voice. At an election speech Vajpayee once gave in Jaipur, someone threw a snake into the crowd. When the crowd panicked, Vajpayee said, from the podium, there was no snake. The event went on, audience reassured.

After the leadership tussle that followed Deendayal's death, Advani and Vajpayee settled into these complementary roles. When the mood of the nation was for ideological moderation-like in the 1970s or late 1990s-Advani followed while Vajpayee led. When the mood was of anxiety-like in the 1980s and early 1990s-Vajpayee obeyed while Advani steered the party.

Neither Vajpayee nor Advani were intellectuals in the sense that neither had a long term civilizational vision for their country. But they were able to see the arc of history in the medium-term, i.e., they deciphered the trajectories of the Congress and Hindu nationalism in the first six decades of Indian independence, and their own paired roles through this journey. So conscious were they of the characters they needed to play that they indulged in role play. Advani acted more bigoted than he really was; Vajpayee was adept at performing the role of a Nehruvian liberal. They were wearers of masks, both.

Their alliance worked because they rarely intruded on the other's competence (Advani's coalition-building in 2004 was the exception that proved the rule). Vajpayee seldom visited the party headquarters. He also trusted Advani's judgement on how far the cadre was willing to compromise for the sake of power. The most vivid example of this was when Advani prevailed on Vajpayee to not sack the Gujarat chief minister in April 2002.

In return for this control over the party, Advani ensured that Vajpayee was always given his favoured role: speaking for the party in parliament. He even out-schemed the RSS in the early 1990s to ensure this. And in what must surely be his finest hour, Advani gave the prime ministership of the world's largest democracy to Vajpayee, aware that he himself lacked the soothing smile to keep the BJP in power.

When this division of labour was threatened by others in the party, Vajpayee and Advani backed each other up. Advani supported Vajpayee against Madhok, Sondhi, Swamy and Govindacharya. Vajpayee buoyed Advani against Murli Manohar Joshi. As Shekhar Gupta puts it: 'Advani-Vajpayee are like an old couple you see in the park. They squabble, but if anyone comes in between them, they will defend each other.'

In that sense, it was a genuine jugalbandi: there were different instruments, there was playful competition, there were alternating riffs, and there was, in a profound sense, an equal music.

It is easy to fall in love with Vajpayee. An epicurean, a charmer. It is harder to feel for the colourless, odourless Advani. But some of that must surely be because Advani was more a man of principle than Vajpayee, less altered by make-up. Their opponent, a senior Congressman, provides a telling insight: 'Vajpayee was a better actor than Advani. And Modi is a better actor than Vajpayee. With Advani, what you saw is what you got. Sometimes, in politics, you need to be a good actor.'

As their relationship entered the quicksand of government from 1998 to 2004, it frayed. While Vajpayee was happy to let Advani retain control of the party, he saw government as an extension of parliament, i.e., exclusively his domain. But even when their personal relationship suffered during these years, their professional partnership never fully dissolved. In Yashwant Sinha's words: 'Vajpayee and Advani both realized that they were insecure without each other. People were definitely breathing down their neck. They were insecure that if their differences had gone beyond a point, they would have both been hurt. It's MAD. Mutually Assured Destruction.'

Sinha is describing the relationship through self-interest, which there surely was. And there was plenty of affection too. But as we have read through this book, Vajpayee and Advani's ability to work with each other through thick and thin was based on more than just cold calculations and warm feelings. It was also based on an ideology that valued teamwork.

(Footnotes have been redacted in this exclusive excerpt. Published with permission of Penguin Random House India from 'Jugalbandi: The BJP Before Modi' by Vinay Sitapati. Order your copy here.)

"A Farmer's Daughters Pulling His Plough Shook Me" - by Sonu Sood