The Chamarajpet MLA said the NIA officials have not told them anything about appearing before the agency again. 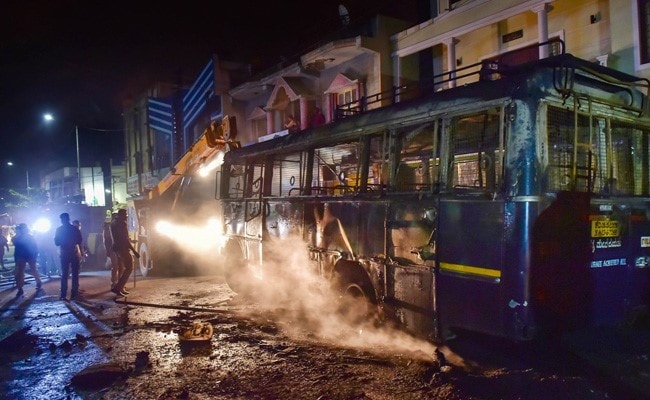 The NIA probing the August 11 violence in Bengaluru over an alleged inflammatory social media post has questioned two Congress MLAs, B Z Zameer Ahmed Khan and Rizwan Arshad, who were present at the spot on that day.

"Yes, me and Rizwan Arshad were summoned yesterday and questioned in connection with the violence. Since we were there on August 11 night from 9.30 PM to about 1 AM, they wanted to ascertain if we knew who had instigated the mob," Mr Khan told PTI.

The Chamarajpet MLA said the NIA officials have not told them anything about appearing before the agency again.

The National Investigation Agency has arrested Sayed Saddiq Ali (44) in connection with the violence.

Besides the NIA, the Central Crime Branch of Bengaluru city police is also probing the case in a coordinated manner, said police sources.

Three people were killed after police opened fire on the night of August 11 to quell a mob that went on a rampage in a city locality, irked over a social media post allegedly put out by a Congress legislator's relative.

Scores, including around 50 policemen, were injured in the violence, apparently triggered by the online post. Pulakeshi Nagar MLA Akhanda Srinivasa Murthy's residence and a police station at D J Halli were among those targeted by the angry mob.

The house of the MLA, who was not at home at the time, was allegedly set on fire.

The rioters also torched many police and private vehicles, badly damaged the house and looted the belongings of MLA Murthy and those of his sister.

So far, 421 people have been arrested, including Social Democratic Party of India leader Muzammil Pasha.

Home Minister Basavaraj Bommai had claimed that the internal strife in the Congress, coupled with the coming BBMP (city corporation) elections, had resulted in the violence.

However state Congress chief D K Shivakumar had dismissed the charge and alleged that the government was trying to cover up its failure to prevent the riots by giving misleading statements.