Tamil Nadu Elections 2021: There are a total of 3,998 candidates across the 234 constituencies and around 6.3 crore people eligible to cast their votes, with the results to be declared on May 2

Tamil Nadu votes for a new government today in a single-phase assembly election that pits Chief Minister Edapaddi K Palaniswami and his ruling AIADMK, which has allied with the BJP, against the MK-Stalin-led DMK-Congress combine that swept 38 of 39 Lok Sabha seats in the state in 2019.

Also in the mix are actor-politician Kamal Haasan and his MNM (Makkal Needhi Maiam) and a whole host of regional parties, in a state where politics (and elections) is usually dominated by the DMK and AIADMK, leaving even the BJP and Congress with very little space to operate.

This is the first state poll since the deaths of J Jayalalithaa (who died in 2016) and M Karunanidhi (who died in 2018) - both were among Tamil Nadu's most iconic political leaders, and their absence leaves a power vacuum many are racing to fill.

Chief among those candidates are Mr Palaniswami, or EPS, and DMK boss MK Stalin. It is likely the election will come down to a straight fight between the two and their outfits. 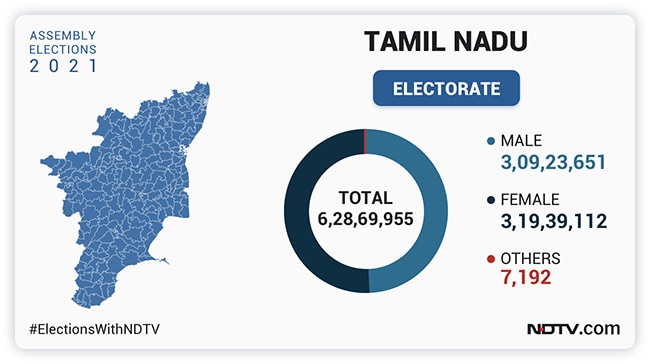 EPS is often viewed as an "accidental Chief Minister" because he was handpicked by Sasikala - the expelled AIADMK chief - to fill the seat just before she was convicted in a corruption case.

On the other side is MK Stalin who, at 68, is itching to take his bow as Chief Minister - a position his father Karunanidhi held five times between 1969 and 2011.

Mr Palaniswami will contest from the Edappadi constituency and his deputy from Bodinayakanur, while Mr Stalin will be on the ballot in Kolathur.

Kamal Haasan and his MNM had a rather forgettable electoral debut in the 2019 general election - they failed to win a single seat. He is more confident now though; last month he told NDTV "We were a nascent party for the Lok Sabha election... Now we are actual fighters for the cause... ".

Kamal will fight from Coimbatore (South) with the BJP's Vanathi Srinivasan a major challenge.

The BJP and the Congress might see an improvement this year. Both parties have been hard at work on the campaign trail, with Prime Minister Narendra Modi and Home Minister Amit Shah on one side, and Rahul Gandhi on the other.

The BJP has held rallies where the Prime Minister's rhetoric has been on full display, and the Congress has reached out to young voters; Mr Gandhi has visited schools and colleges. In 2011 and 2016 the BJP failed to win a seat. The Congress did a little better, winning five and eight, respectively.

Polling will begin at 7 am Tuesday, with the number of booths increased to nearly 89,000 to accommodate Covid protocols like social distancing.

There are a total of 3,998 candidates across the 234 constituencies, and around 6.3 crore people eligible to cast their votes in the Tamil Nadu election. Results of the election will be declared on May 2.