For more than a year, Mr Karunanaidhi has been in and out of hospital while recovering from a long ailment. He lived a secluded life -- making no public appearance except occasional visits to his party office.

M Karunanidhi died in Kauvery Hospital in Chennai at 6.10 pm on Tuesday.

DMK chief M Karunanidhi - five-time Chief Minister of Tamil Nadu who dominated the state's politics for six decades along with arch-rivals MG Ramachandran and later, J Jayalalithaa - died at a hospital in Chennai Tuesday evening. The 94-year-old leader was admitted to Kauvery Hospital on July 28 after he contracted urinary tract infection and developed a high fever.

He died at 6.10 pm. "Despite the best possible efforts by our team of doctors and nurses to resuscitate him, he failed to respond," the hospital said in a statement.

On Monday evening, his health took a downturn again. In a bulletin, the hospital said maintaining his vital organ functions remains "a challenge" in view of his age-related ailments and the next 24 hours would be crucial.

The body of the DMK president was taken to his home in Gopalapuram in Chennai and was later shifted to his other residence in CIT Colony. It was taken to Rajaji Hall this morning for people to pay their last respects. Karunanidhi's mortal remains will be laid to rest later today. 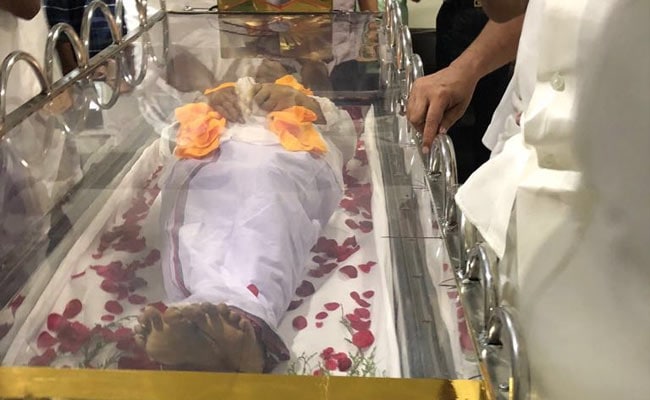 Karunanidhi's mortal remains will be buried on Wednesday

Prime Minister Narendra Modi tweeted his condolence for the death of Mr Karunanidhi, calling him a deep-rooted mass leader, prolific thinker, accomplished writer and a stalwart devoted to the welfare of the poor. In a series of tweets, he said:

Deeply saddened by the passing away of Kalaignar Karunanidhi. He was one of the senior most leaders of India.

We have lost a deep-rooted mass leader, prolific thinker, accomplished writer and a stalwart whose life was devoted to the welfare of the poor and the marginalised. pic.twitter.com/jOZ3BOIZMj

I have had the opportunity of interacting with Karunanidhi Ji on several occasions. His understanding of policy and emphasis on social welfare stood out. Firmly committed to democratic ideals, his strong opposition to the Emergency will always be remembered. pic.twitter.com/cbMiMPRy7l

PM Modi will travel to Chennai this morning to pay his last respects to Mr Karunanidhi. So will Congress president Rahul Gandhi.

For more than a year, Mr Karunanaidhi has been in and out of hospital while recovering from a long ailment. He lived a secluded life - making no public appearance except occasional visits to his party office.

During the last stretch of his illness, President Ram Nath Kovind, Vice President Venkiah Naidu and a number of political leaders across party lines visited him -- initially at his home and then at the hospital. Among them were Congress chief Rahul Gandhi, union minister Nitin Gadkari, Trinamool Congress leader Derek O'Brien, actor-politicians Kamal Haasan and Rajinikanth.

Like MG Ramachandran and J Jayalalithaa, Mr Karunanidhi quit a flourishing career in movies to devote himself to politics and the Dravidian movement led by Periyar EVR -- which he joined soon after it started in 1949. The "Kalaignar" (artiste) was known for his film scripts - a skill that greatly helped him in his political career. His powers of oratory bestowed on him a cult status much similar to Jayalalithaa.

In 1969, Mr Karunanidhi became a Chief Minister after DMK ideologue CN Annadurai died in office. Three years later, he fell out with MG Ramachandran and shunted him out of the party - leading to the formation of life-long rival All India Anna Dravida Munnetra Kazhagamor AIADMK.

The AIADMK came to power in 1977 and MGR ensured that Mr Karunanidhi's party stayed out of power as long as he was alive. Mr Karunanidhi regained to power in power in 1989 after MGR's death. But in the emotional aftermath of Rajiv Gandhi's assassination, he was shunted out as he was seen to be close to the Lankan outfit LTTE, responsible for the bomb attack on the former Prime Minister.

He returned to power again in 1996, after corruption charges caused a major loss of face for Jayalalithaa. Since then, the two parties have been voted in alternately - a tradition that was broken in 2016, when Jayalalithaa was elected for a second straight term.