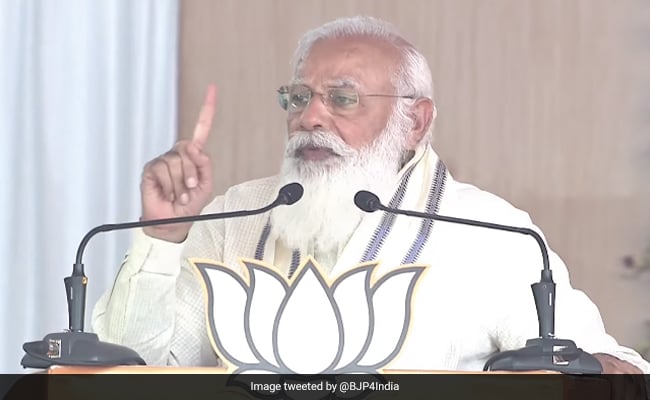 In Tamil Nadu to campaign for the AIADMK-BJP alliance ahead of next week's election, Prime Minister Narendra Modi played the 'Jallikattu' card to appeal to voters in Madurai - where the controversial activity is popular - as he accused the DMK and Congress of disrespecting and outlawing the practice.

The Prime Minister - who spoke in English, with a translator by his side - also praised the Tamil language, hailing it as the world's oldest and Madurai's connection to regional literature.

"When there was a DMK government here and a UPA government at the centre, they banned Jallikattu. An UPA minister said it is a barbaric practice... is that right? Is that how one speaks about an age-old tradition that is so important to Tamil culture?" he asked voters.

"After we came to power in 2014, it was the NDA government and AIADMK in the state that ensured Jallikattu is not banned. Why? Because for us Tamil culture is important," he declared.

Jallikattu - regarded as a symbol of Tamil pride - is a contentious topic.

In 2014 the Supreme Court banned it over concerns of animal cruelty. The state restored the activity three years later, with amendments relating to prevention of that cruelty.

Ahead of the 2016 polls the Congress promised a ban on Jallikattu if it came to power.

That position has now flipped though; in January Rahul Gandhi attended a Jallikattu event in Madurai. "It was quite a lovely experience to see Tamil culture, history in action," he said.

Aside from Jallikattu the PM also slammed the opposition for having "no real issues to talk about" and accused the DMK of "spreading the mafia" in the state. He flagged the building of an AIIMS in the city, and the provision of credit for the textile sector, to show progress under NDA rule.

"Sister and brothers of Tamil Nadu... the DMK and Congress have no real issues to talk about but they must control their lies. They lie to you every day...," he said.

Tamil Nadu votes in a single phase on April 6 with results due May 2.