"I have come here as I think Tamil culture, and history are essential for India's future and need to be respected," Rahul Gandhi told reporters at the Jallikattu event in Madurai, which was attended by ally DMK's chief MK Stalin. 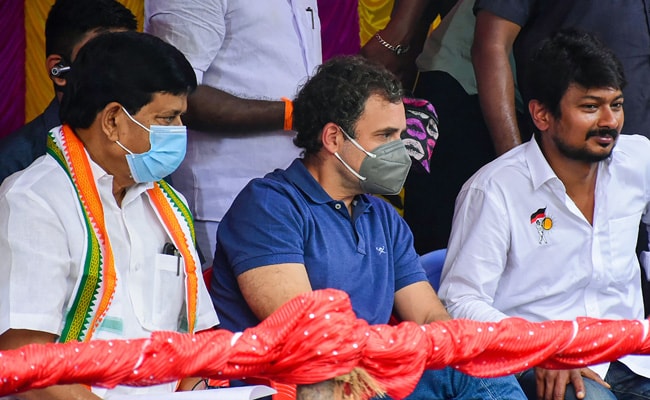 Congress's Rahul Gandhi celebrated Pongal in poll-bound Tamil Nadu today with a call to Tamil sentiments. "I have come here to give a message to those who think that they can run roughshod over Tamil people, can push aside Tamil language and Tamil culture," he said at an event of Jallikattu, the state's traditional bull taming sport.

"I have come here as I think Tamil culture, and history are essential for India's future and need to be respected," Mr Gandhi told reporters at the event in Madurai, which was attended by ally DMK's chief MK Stalin.

The Congress DMK alliance -- formed ahead of the 2019 Lok Sabha elections -- had managed to win 37 of the state's 38 Lok Sabha seats.

"It was quite a lovely experience to see Tamil culture, history in action. I thank the Tamil people. I'll be coming back here, not once but numerous times," added Mr Gandhi, who was accompanied by senior party leaders KC Venugopal, state Congress chief KS Alagiri and Puducherry Chief Minister V Narayansamy.

"It was quite a lovely experience to see Tamil culture, history in action. I'm happy that Jallikattu is being organised in a systematic and safe way that both the bull and the youngsters are safe and everybody is being taken care of," added Mr Gandhi, whose party was called out on social media for its doublespeak on Jallikattu.

The party's manifesto for the 2016 Tamil Nadu election had promised a ban on the annual event if it came to power.

Jallikattu has become the symbol of Tamil pride, especially after the huge controversy over the treatment of the bulls.

In 2014, the Supreme Court had banned the sport. But following massive protests, the state government restored it three years later with an amendment in the law relating to the prevention of cruelty to animals.

The matter had underscored the north-south divide, with the state's residents contending that those opposing Jallikattu did not understand the Tamil language and culture. The divide had deepened last year over the Hindi language row following the Centre's move to name Hindi as the mandatory third language in schools.

This year, the BJP – which formed an alliance with the state's ruling AIADMK ahead of the 2019 Lok Sabha polls -- has been at work to assuage the Tamil people.