Andhra Pradesh Deputy Chief Minister however, said any alliance would be decided only ahead of the (general) elections. 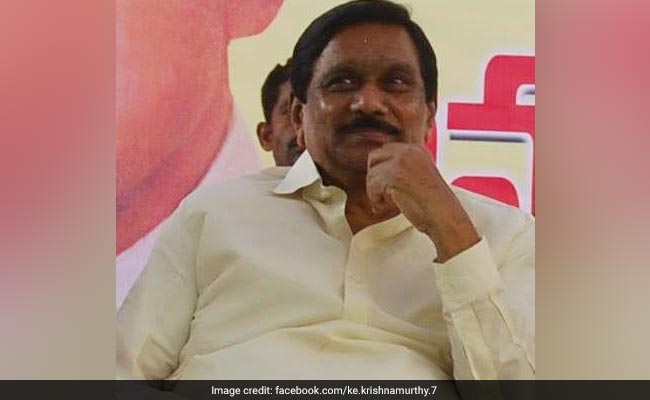 Amaravati: Taking an extreme stand against a possible alliance between ruling Telugu Desam and Congress, senior party leader and Andhra Pradesh Deputy Chief Minister (Revenue) KE Krishna Murthy on Wednesday said he was ready to 'hang' himself if the tie-up became a reality.

"There is no question of the TDP aligning with the Congress but if that happens, I am ready to hang myself," he said at a press conference in his hometown Kurnool.

He went on to add that he was speaking this "on behalf of the party" and it was not his individual view.

Mr Murthy, however, said any alliance would be decided only ahead of the (general) elections.

His remarks come at a time when talk about TDP cozying up to the Congress has become a hot political topic in the state after Chief Minister Chandrababu Naidu rubbed shoulders with Rahul Gandhi in Bengaluru recently.

Promoted
Listen to the latest songs, only on JioSaavn.com
Some TDP leaders even tried to reason that the Congress promised to accord special category status to Andhra Pradesh if it returned to power at the Centre in 2019 and hence being pally with that party would do no harm.

Karnataka Chief Minister HD Kumaraswamy in an interview to a news magazine has said he was asked by Mr Naidu and other leaders such as West Bengal chief minister Mamata Banerjee to align with the Congress.