Ahead Of 2019 Polls, BJP's Roadmap To Strengthen Party In Telangana

Amit Shah, the BJP president, is likely to visit the state next month to review the party's preparations Lok Sabha constituency-wise, he said. 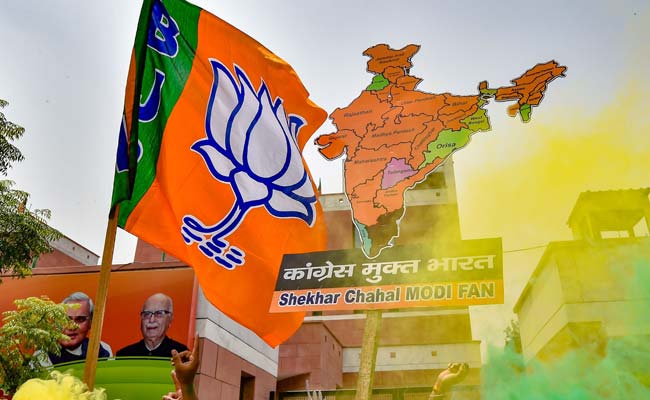 BJP in Telangana would organise among others "regional and major public meetings": Officials

Hyderabad: The BJP would undertake a series of programmes in the coming months in Telangana to raise issues of farmers and to strengthen the party in the run-up to simultaneous Lok Sabha and assembly polls in 2019, its state president K Laxman said today.

"(We) have come to the conclusion during the two-day meeting (of state executive on May 27 and 28) that BJP has future politically in Telangana; Amit Shah ji has also said clearly that we are going to pay special attention to Telangana and Andhra Pradesh," he told reporters here.

Amit Shah, the BJP president, is likely to visit the state next month to review the party's preparations Lok Sabha constituency-wise, he said.

BJP in Telangana would organise among others "regional and major public meetings" as per a calender of events, K Laxman said.

The executive meeting accused the TRS government of failure to help farmers on various counts, including preventing suicides, paying compensation for crop losses and providing a bonus on minimum support price.

A political resolution adopted at the state executive meeting said the party would agitate on all these issues.

K Laxman claimed that the TRS and TDP, the ruling parties in Telangana and Andhra Pradesh respectively, fear the "rising popularity" of BJP and that they were gravitating towards the Congress.

Promoted
Listen to the latest songs, only on JioSaavn.com
He added that Union Law Minister Ravishankar Prasad would hold a press conference and meet editors of some media organisations, here on the occasion of the NDA government completing four years in office, during a visit to the city on May 31.

The BJP currently has five MLAs and one Lok Sabha member in Telangana.
Comments
BJPTelangana