After some reluctance, the hospital in Agra carried out a registration in the name of 'Shri Krishna' and also bandaged the arm of the idol back. 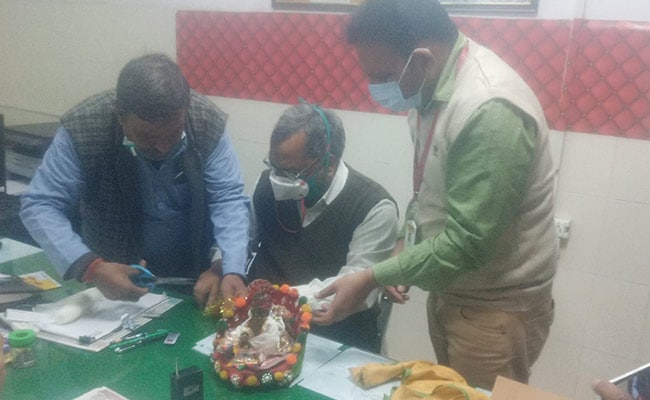 Agra: Priest Lekh Singh said he broke the idol when he was giving it a bath.

The staff at the district hospital here found themselves in a baffling situation on Friday, when a priest came wailing with a request to bandage the broken arm of an idol of Lord Krishna.

The staff was faced with a priest who came distraught to the hospital urging them to attend to the deity's idol, whose arm he accidently broke while giving it a bath in the morning.

After some reluctance, the hospital carried out a registration in the name of 'Shri Krishna' and also bandaged the arm of the idol back.

A video of the crying priest with an idol of 'Laddu Gopal' - the childhood form of the deity - with a broken arm also circulated on social media.

According to some eyewitnesses, the priest reached district hospital at about 9 am and insisted that the hospital staff tend to the idol.

Priest Lekh Singh said he broke the idol when he was giving it a bath.

"When I was praying in the morning and giving bath to the idol of the lord, the idol slipped and its arm was broken," he said.

"I was deeply moved because I am attached with the god. In my desperation, I went to district hospital to get it treated," he said.

Lekh Singh said he is a priest at the Pathwari temple in Kheria Mod, Arjun Nagar, for the past 30 years.

"No one took my request seriously at the hospital. I was broken from inside and began crying for my god," he said.

The priest was also accompanied by the locals, eyewitnesses said.

Dr Ashok Kumar Agrawal, the Chief Medical Superintendent at the district hospital, told news agency PTI that he was informed by the hospital that a priest had come with an idol with a broken arm and was crying to get it treated.

He said considering the priest's sentiments they made a registration in the name of 'Shri Krishna' for the idol.

"We also bandaged the idol for the satisfaction of the priest," Mr Agrawal said.