A 29-year-old man driving the car was arrested at the scene, and named by newspapers as Salih Khater, from the central English city of Birmingham. 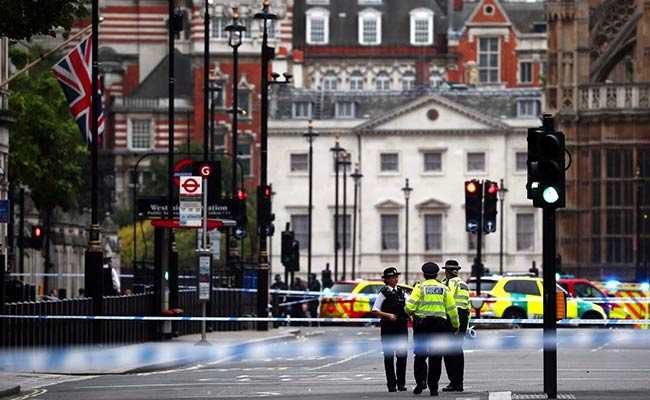 A security source has said the motive of the attack is not known yet.

The man arrested for driving into a barrier protecting the Houses of Parliament in a suspected terror attack was a Briton of Sudanese origin from Birmingham, media reports said Wednesday.

Three people were injured when the silver Ford Fiesta drove into cyclists before crashing to a halt outside the House of Lords early on Tuesday morning.

A 29-year-old British man driving the car was arrested at the scene, and named by newspapers as Salih Khater, from the central English city of Birmingham.

Top police counter-terrorism officer Neil Basu said the suspect was not known to intelligence agencies, but The Times reported he was known to police.

The paper reported that Khater is a shop manager in Birmingham and had studied at Sudan University of Science and Technology, citing his Facebook page.

Abubakr Ibrahim, a childhood friend, told the paper: "He is not a terrorist. I have known him since childhood. He is a good man."

He said Khater was the son of sorghum farmers, and had moved to Britain about five years ago in order to earn money to help his family.

The member of parliament for the Hall Green area of Birmingham, Roger Godsiff, tweeted that the suspect was believed to have been from his area.

Police also said on Tuesday they were carrying out searches at two addresses in the city, as well as an address in nearby Nottingham.

Police believe the Ford Fiesta travelled down to London on Monday night, arriving just after midnight.

It then drove around the Tottenham Court Road area -- near Oxford Street -- before heading to the area around parliament around 6:00am (0500 GMT).

The alleged attack took place around 7:30am.

The car crashed into a security barrier, one of many erected on key British sites in the wake of the September 11, 2001, attack in the US, and reinforced in recent years.

Last year, barriers were put on London's bridges after a man rammed his car into pedestrians on Westminster Bridge before crashing into barriers outside parliament and stabbing a police officer to death.

Five people were killed and more than 50 wounded. The attacker, Khalid Masood, who had also been living in Birmingham, was shot dead at the scene.

Mayor of London Sadiq Khan said on Wednesday that he backed the idea of banning vehicles from parts of the area of the attack.

"I've been an advocate for a while now of part-pedestrianising Parliament Square," he told BBC radio.

But he warned any changes must not lose "the wonderful thing about our democracy which is people having access to parliamentarians, people being able to lobby Parliament, visitors being able to come and visit".

London's police commissioner Cressida Dick said this was "a matter that will be discussed no doubt between parliamentary authorities, us, the intelligence agencies and indeed the local authorities".