The Kim-Trump summit broke down in late February without a deal on North Korea's nuclear arsenal, after cash-strapped Pyongyang demanded immediate relief from sanctions but the two sides disagreed over what the North was prepared to give up in return. 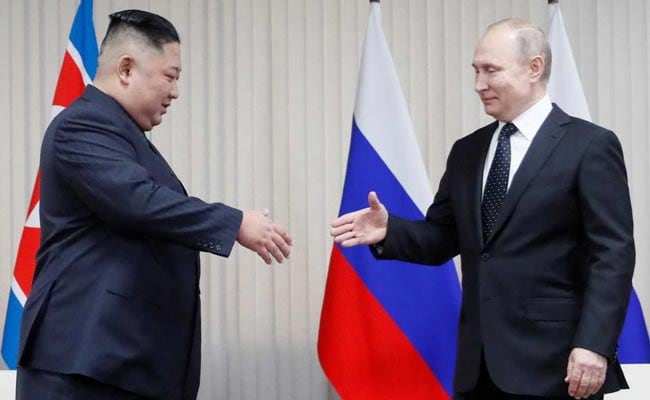 Kim Jong Un and Vladimir Putin met on Thursday in Vladivostok for their first summit. (File)

North Korean leader Kim Jong Un accused the US of acting in "bad faith" at his summit with Russia's Vladimir Putin, Pyongyang's state media said Friday after he secured Moscow's backing in his standoff with Donald Trump.

Kim and Putin met on Thursday in the far eastern Russian port of Vladivostok for their first summit -- squarely aimed at countering US influence with Pyongyang and Washington deadlocked over the North's nuclear arsenal.

Putin was keen to put Moscow forward as a player in a new global flashpoint -- and it appears Kim was eager to take him up during talks described by KCNA as "unreserved and friendly".

Putin, known for delaying meetings with international guests, was waiting for Kim when he emerged from his limousine and the two leaders greeted each other warmly before nearly five hours of meetings on an island off Vladivostok.

During the discussions, Kim said the Korean situation was "a standstill and has reached a critical point", the official Korean Central News Agency said.

He added the US adopted a "unilateral attitude in bad faith at the recent second DPRK-US summit talks", the agency said, and that "Peace and security on the Korean peninsula will entirely depend on the US future attitude."

The Kim-Trump summit broke down in late February without a deal on North Korea's nuclear arsenal, after cash-strapped Pyongyang demanded immediate relief from sanctions but the two sides disagreed over what the North was prepared to give up in return.

Russia has already called for the sanctions to be eased, while the US has accused it of trying to help Pyongyang evade some of the measures -- accusations Moscow denies.

Just a week ago, Pyongyang demanded the removal of US Secretary of State Mike Pompeo from the stalled nuclear talks, accusing him of derailing the process.

On Thursday, Putin emerged from the meeting saying that like Washington, Moscow supports efforts to reduce tensions and prevent nuclear conflicts.

But he also insisted that the North needed "guarantees of its security, the preservation of its sovereignty".

It was "what the North has been saying all along" said Kim Keun-sik, professor of North Korean Studies at Kyungnam University, adding that Putin's support for Pyongyang's stance was the "biggest prize" Kim won in Vladivostok.

Both leaders said they were looking to strengthen ties that date back to the Soviet Union's support for the founder of North Korea, Kim's grandfather Kim Il Sung.

The North Korean leader invited Putin to visit North Korea "at a convenient time" and the invitation was "readily accepted", KCNA said.

"Kim met Putin because he wanted to show he had someone on his side," said Lee Woo-young, a professor at the University of North Korean Studies in Seoul.

"Kim is seeking an upper hand for future talks with the US and meeting foreign leaders like Putin can help him do that."

But Washington was unlikely to be swayed, he added, with analyst Kim also doubting the US would be "surprised or alarmed".

Kim attended a wreath-laying at a World War II memorial to Russia's Pacific Fleet in Vladivostok on Friday, and was expected to board his armoured train later to return home.

The Vladivostok summit was Kim's first with another head of state since returning from Hanoi.

It followed repeated invitations from Putin after Kim embarked on a series of diplomatic overtures last year.

Since March 2018, the North Korean leader has held four meetings with Chinese President Xi Jinping, three with South Korea's Moon Jae-in, two with Trump and one each with the leaders of Vietnam and Singapore.

There were no concrete announcements or agreements in Vladivostok, but analysts said Thursday's meeting was valuable to both sides.

"For North Korea, it's all about securing another exit. China talks about sanctions relief but it doesn't really put it into action," said Koo Kab-woo, of the University of North Korean Studies.

"For Russia, North Korea is elevating it back to one of the direct parties, on the same footing as China."

Soon after his first election as Russian president, Putin sought to normalise relations with Pyongyang and met Kim Jong Il -- the current leader's father and predecessor -- three times, including a 2002 meeting also held in Vladivostok.

China has since cemented its role as the isolated North's most important ally, its largest trading partner and crucial fuel supplier, and analysts say Kim could be looking to balance Beijing's influence.

The last meeting between the leaders of Russia and North Korea came in 2011, when Kim Jong Il told then-president Dmitry Medvedev that he was prepared to renounce nuclear testing.

His son has since overseen by far the country's most powerful blast to date, and launches of missiles capable of reaching the entire US mainland.

(Except for the headline, this story has not been edited by NDTV staff and is published from a syndicated feed.)
Comments
North Korea -USNorth Korea Russia talksNorth Korean leader Kim Jong U