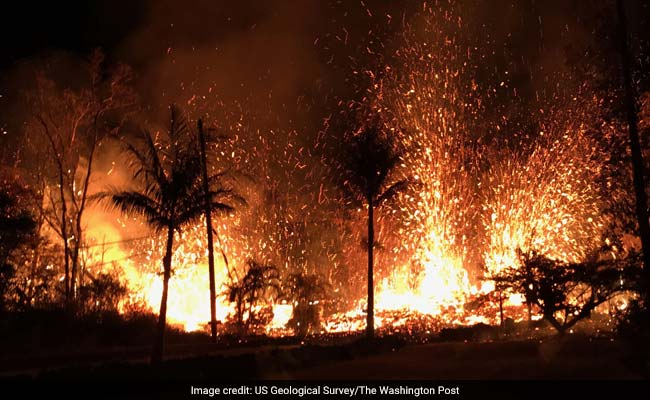 Hawaii Volcano: By 9 pm, lava fountains as high as about 230 feet were erupting from the fissure.

Less than a week ago, Leilani Estates was the picture of serenity on Hawaii's Big Island, a subdivision in the Big Island's eastern Puna district filled with wooden homes nestled into tropical plant-filled lots.
The eruption of the island's most active volcano changed everything.

Shortly after Kilauea erupted Thursday, the ground split open on the east side of Leilani Estates, exposing an angry red beneath the lush landscape. From the gash, molten rock burbled and splashed, then shot as high as 80 to 100 feet in the air.

The Hawaii County Civil Defense Agency called it "active volcanic fountaining." Some local residents insisted it was Pele, the Hawaiian volcano goddess, come to reclaim her land. Residents there were ordered to flee amid threats of fires and "extremely high levels of dangerous" sulfur dioxide gas. 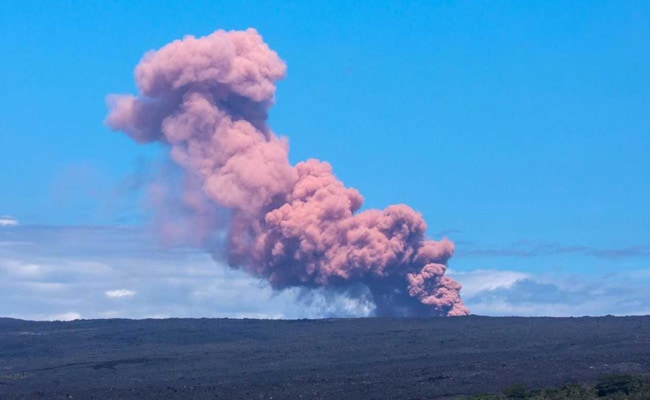 Kilauea's eruption Thursday had sent white, billowing clouds of steam and volcanic ash into the sky.

Soon, another such fissure had formed less than three streets to the west. Then another, and another. From the vents, hot steam - and noxious gases - rose, before magma broke through and splattered into the air.

As of Sunday morning local time, at least 10 such fissure vents were reported in the neighborhood, including two that had opened anew late Saturday night. The fissures are forming on along a northeast-southwest line in the rift zone, and not all of the older fissures are still actively spewing lava, said Wendy Stovall, a volcanologist with the U.S. Geological Survey.

"As the eruption progresses, there will become a preferred pathway for the magma to go through," Stovall said. "Some of the outer vents along this fissure line will start to close up and congeal because the lava is going to essentially harden."

Once that happens, lava fountains from the remaining open vents can shoot even higher - reaching up to 1,000 feet, Stovall said. On Saturday, lava from one of the newer fissures spurted as high as 230 feet into the air, according to the Geological Survey.

More outbreaks are likely to occur along the rift zone, officials said. 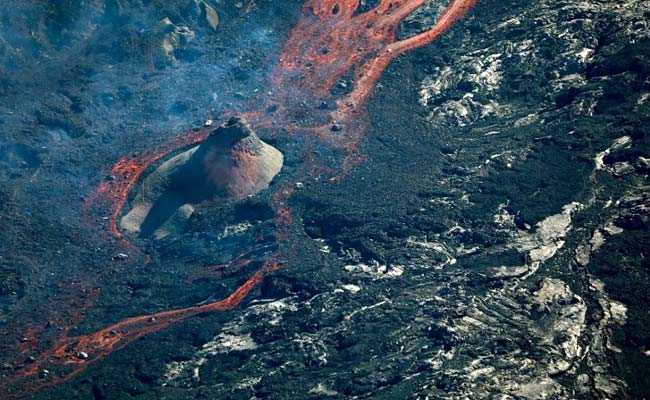 Lava has been spilling out of Puu Oo crater since 1983, making Kilauea the world's longest continuously erupting volcano.

Drone footage showed lava spouting along the fissures that had formed, creeping toward Leilani Estates homes and leaving lines of smoldering trees in their wake. The flows destroyed or cut off several streets in the neighborhood - typically home to about 1,700 people, before most of them evacuated last week.

Meanwhile, over the past few days, some photographers have followed the fissures, posting dramatic photos and videos of lava spattering into the air or oozing across roads. Officials have urged everyone to leave Leilani Estates, where a mandatory evacuation order remains.

"Being in Hawaii and being around lava you get used to the way it behaves and so you kind of become comfortable around it," Stovall said. "(The lava flows) are mesmerizing to see. I understand why people want to see them but it's not advisable. It's a dangerous situation."

The county civil defense agency put it more bluntly in an advisory Sunday: "Please, the residents of Leilani need your help by staying out of the area. This is not the time for sightseeing."

The agency announced Sunday that certain Leilani Estates residents might be able to return briefly to their homes to retrieve pets, medicine or important items left behind - but would need to leave immediately afterward because of "the very unstable conditions of air quality and of the roads."

At least nine homes in the subdivision have been destroyed by fire, according to Hawaii County Mayor Harry Kim. 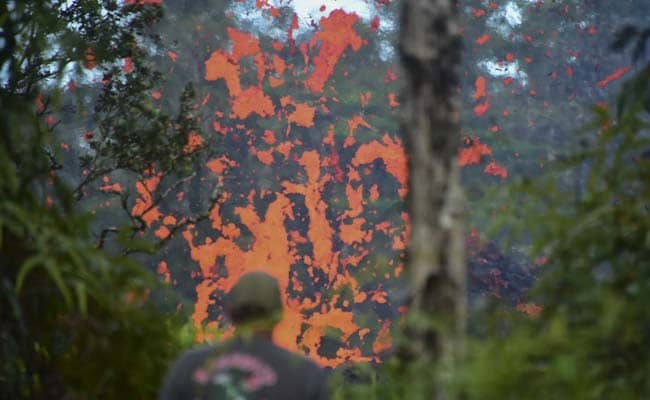 Lava is seen coming from a fissure in Leilani Estates subdivision on Hawaii's Big Island. (AFP)

"This is a very fast-moving situation," Kim told the news site. "This is unfortunately not the end."
Kilauea first erupted Thursday, sending fountains of lava gushing out of the ground and billowing clouds of steam and volcanic ash into the sky on the eastern side of the island.

Three days later, some residents there continue to suffer through a triple whammy of threats. From below, lava has spewed forth out of an increasing number of fissures that have opened up in the ground, oozing toward homes.

Several earthquakes - including the strongest to hit Hawaii in more than four decades - have jolted the island's residents, some as they were in the midst of evacuating.

And in the air, noxious fumes from the volcano are what some officials say could be the greatest threat to public health in the wake of its eruption.

After the eruption Thursday, the island shook at regular intervals, but especially around midday Friday: A 5.6-magnitude quake hit south of the volcano around 11:30 a.m., followed about an hour later by a 6.9-magnitude temblor, according to the U.S. Geological Survey.

The latter was felt as far away as Oahu and struck in nearly the exact same place as a deadly 7.4-magnitude earthquake in 1975, according to the Geological Survey.

Videos posted to social media showed homes visibly shaking, items clattering to the floor at supermarkets and waves forming in swimming pools as the 6.9-magnitude quake rattled the Big Island on Friday afternoon.

"I think the whole island felt it," said Cori Chong, who was in her bedroom with her foster dog, Monty, when the magnitude-6.9 quake struck, frightening both of them. Even though Chong lives on the Hamakua coast, about an hour north of the earthquake's epicenter, the shaking in her home was so violent that it caused furniture to move and glass to shatter.

David Burlingame, who lives about two miles west of Leilani Estates, told The Washington Post that he and a friend ran outside when the earthquake hit "and watched my house just shake back and forth."
"Everybody is kind of on edge," Burlingame said Saturday, of both the potential for additional earthquakes and the unpredictability of the lava flows. "The worst part is kind of waiting to see, because you really never can tell what can happen."

The earthquakes also prompted the rare closure of Hawai'i Volcanoes National Park, after they damaged some of the park's trails, craters and roads. The first earthquake triggered a cliff to collapse into the ocean, and fissures began to appear in the ground at a popular overlook near the Jaggar Museum.

Park officials said they canceled hikes Friday and evacuated about 2,600 visitors, along with all nonemergency employees.

"Safety is our main priority at Hawai'i Volcanoes National Park, and it is currently not safe to be here," park superintendent Cindy Orlando said in a statement. "We will monitor the situation closely, and reopen when it is safe to do so."

The county civil defense agency reported that the threat of a tsunami was low after the earthquakes, though officials warned that residents were not in the clear yet.

"Everything is still elevated," said agency administrator Talmadge Magno, according to Hawaii News Now. "It kind of gets you nervous."

Jordan Sonner, a Big Island Realtor, was on another part of the island taking pictures for an upcoming listing Thursday when she "got the call that there was lava in Leilani" and rushed back to her home, just outside Leilani Estates.

"To describe it in a single word: chaos," Sonner told The Post Saturday, of the evacuation. "My immediate threat was not the lava. It was the sulfur dioxide gas."

It took Sonner about an hour and a half to reach her home, grab important documents and her pets - four dogs and a chinchilla - and scramble back out of there, she said. She's now staying with a friend in Mountain View, about 20 miles northwest of Leilani Estates, and expects it could be a long while before it's safe for residents to return.

"It's so hard to tell what is going to happen because it's just so early. This volcano being a shield volcano, the way that it erupts, it just erupts slowly," Sonner said. "We kind of just have to sit and wait to see what direction the lava is going to flow in and what other fissures are going to open up. This is far from over."

When asked whether she was afraid she would lose her home, Sonner paused, before describing the uniqueness of the community there.

"The way I kind of look at it is, the land doesn't really belong to us. It belongs to Pele," Sonner said, referring to the Hawaiian volcano goddess. "We get to live on it while we can and if she wants it back, she'll take it. I have good insurance."

As of Friday afternoon, at least a few hundred people had evacuated their homes in Leilani Estates and nearby Lanipuna Gardens, taking refuge at local churches, Red Cross shelters and with family and friends in other parts of Hawaii, Rep. Tulsi Gabbard, D-Hawaii, told CNN's Jake Tapper.

Gabbard warned that, in some ways, the threat from the sulfur dioxide gas could be more dangerous than the lava flows, which had stopped in places after the eruption. If conditions worsened, even first responders would not be able to go into the affected neighborhoods to help trapped residents, she added.

"Sulfur dioxide gas can be so toxic and thick in some areas that it can be fatal, especially to those who have respiratory illnesses," Gabbard said. "The wind can push (the gas) in different directions, so that's a very serious concern given the high levels and, you know, people don't necessarily have the kinds of protective gas masks that they would need if they were right in the thick of this gas."

Kilauea is the youngest and most active volcano on Hawaii Island, according to USGS. The eruption from the volcano came hours after a 5.0-magnitude earthquake jolted the island Thursday morning. As The Post's Sarah Kaplan reported, Kilauea is made of basalt, a fluid lava that makes for effusive - rather than explosive - eruptions:

"Rather than building up into a steep, towering peak like Krakatau in Indonesia or Mount St. Helens in Washington state, the fluid rock at Kilauea creates a broad, shallow dome known as a shield volcano.
"Shield volcanoes 'are really voluminous, the largest volcanoes on Earth, but because they have those long, low-angle slopes, they're not very dramatic,' said Tari Mattox, a geologist who worked at the Hawaii Volcano Observatory for six years. 'People are surprised when they go to Hawaii and they say, "Where's the volcano?"And I tell them, "You're standing on it!'"

"... Rocks moving upward through the mantle beneath Hawaii begin to melt about 50 miles beneath the surface. That magma is less dense than the surrounding rock, so it continues to rise until it 'ponds' in a reservoir that's roughly three miles wide and one to four miles beneath the summit. As pressure builds in the magma chamber, the magma seeks out weak spots in the surrounding rock, squeezing through the earth until it reaches a vent to the surface."

Geologists said the current seismic activities around Puna most closely resemble the events that precipitated a 1955 eruption, according to Hawaii News Now. That eruption lasted about three months and left almost 4,000 acres of land covered in lava, the news site reported.

Promoted
Listen to the latest songs, only on JioSaavn.com
More recently in 2014, lava again threatened the Puna district, specifically the town of Pahoa and its surrounding area, The Post reported. During that event, lava flowed as quickly as 20 yards per hour, and up to 60 structures were at risk.
---
The Washington Post's Lindsey Bever and Allyson Chiu contributed to this report.