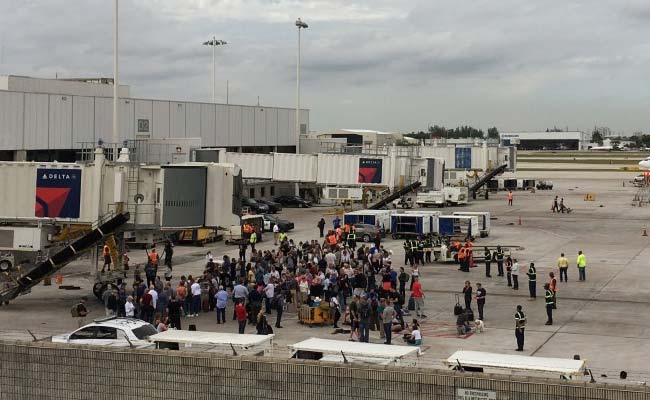 A lone shooter was responsible for the attack and was taken into custody.

The attack at a quiet baggage claim area sent people scrambling through the terminals and across the airfield at one of the country's busiest airports, shutting down all flights while paramedics and federal and local law enforcement officers flooded the scene.

The suspected shooter is in custody, and it appears he acted alone, said Broward County Sheriff Scott Israel. In addition to the people slain, eight others were brought to area hospitals, all with apparent gunshot wounds.

"Right now, this scene is considered fluid and active," Israel said during a news briefing on Friday afternoon at the airport, which is operated by Broward County.


Police did not immediately identify a motive for the shooting at the Fort Lauderdale-Hollywood International Airport, which they said occurred just before 1 p.m. The gunman was taken into custody without any incident "almost immediately after the shootings," Israel said.

The man in custody was identified by several officials as Esteban Santiago. Sen. Bill Nelson, D-Fla., publicly identified the shooter as Santiago after being told the name by the head of the Transportation Security Administration, according to Ryan Brown, a spokesman for the senator. A federal law enforcement official also confirmed the name to The Washington Post.

Santiago, 26, was carrying an Army ID, according to three federal law enforcement officials.

He was a passenger on a flight traveling with a checked gun in his baggage, said federal law enforcement officials, who asked to speak on the condition of anonymity to discuss the ongoing investigation. The officials said that Santiago had picked up his bag and took the gun into the bathroom to load it before returning to the baggage claim area to begin firing at people. 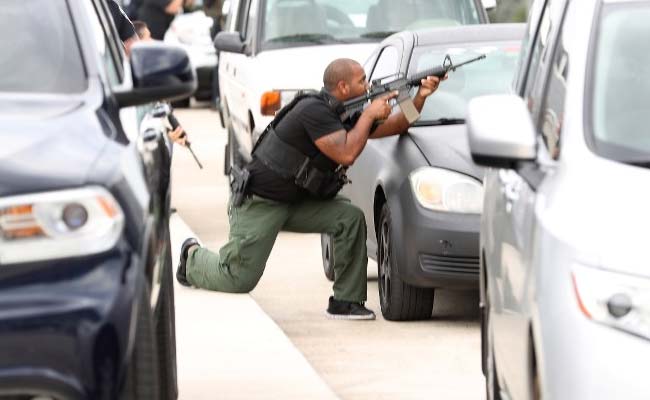 John Schlicher, a pastor from Ohio who was in baggage claim when the shooting happened, said in a brief telephone interview that the gunman, who appeared to be wearing a blue "Star Wars" T-shirt, said nothing as he fired at people's heads.

"He was just shooting randomly into the crowd," Schlicher said during an interview Friday afternoon broadcast on MSNBC. "There were two people to my left and two people to my right who were shot."

The gunman reloaded and continued firing at people, Schlicher said. When police arrived, Schlicher said his wife tried to administer first aid to a man who had been shot in the head while his mother-in-law tried using her sweater to help another man before realizing he was already dead.

In a brief news conference Friday evening, trauma surgeons at Broward Health Medical Center, located just north of the airport, said they received five shooting victims and two needed surgery. All of the patients were in stable condition, they said. Hospital officials declined to comment on their specific injuries or release their ages and gender, citing privacy rules and the ongoing investigation.

Travelers are allowed to bring firearms with them to flights, as long as the guns are unloaded, locked in hard-sided container and in checked baggage, according to the Transportation Security Administration. Ammunition can generally be placed in checked baggage, but it is prohibited from carry-on luggage, and some airlines do not allow transport of any ammo. Passengers are also required to tell airline employees at the ticket counter that they have a weapon in their checked bag.

Santiago is a U.S. citizen with ties to New Jersey, said two federal officials. Military officials said Friday that the suspected shooter, who they named as Esteban Santiago-Ruiz, was a combat engineer in the Alaska National Guard until August, when he was granted a general discharge under honorable conditions after going absent without leave several times and being demoted in rank to private first class.

According to federal law enforcement officials, he visited an FBI office in Anchorage late last year, an encounter that prompted authorities to believe he may have mental health issues.

Santiago went to the FBI office to report something and was expressing some incoherent thoughts, officials said. When he was interviewed by agents, he said he thought the federal government was after him and trying to control him, according to officials recounting the visit. Officials also said he told the FBI that the CIA was forcing him to watch Islamic State propaganda videos to control his mind.

The FBI then contacted local authorities to have him undergo a mental health check, but the officials were not sure what happened after that.

Though there had been some early reports that Santiago traveled to Florida from Canada, the Canadian Embassy in Washington said he had not been on a plane traveling from that country. Instead, they said he had flown from Alaska to Florida, with a stop in Minnesota.

"The suspect did not fly from Canada and was not on a Canadian flight," Christine Constantin, a spokeswoman for the embassy, said in a statement. "We understand from officials he was on a flight originating in Anchorage, transiting through Minneapolis and landing in Ft. Lauderdale. There is no Canadian connection."

The FBI and Bureau of Alcohol, Tobacco, Firearms and Explosives responded to the airport Friday, as did officials from Fort Lauderdale, the state Department of Law Enforcement and other agencies.

Police and FBI agents were interviewing the suspected gunman Friday afternoon, according to law enforcement officials.

In the immediate aftermath of the shooting, no possible motive emerged for this latest spasm of gun violence in a crowded, public place. George Piro, the FBI special agent in charge of the bureau's Miami division, said federal authorities were aiding local law enforcement "until we make a determination on the nature and motive of this."

A federal law enforcement official familiar with the investigation said that the gunman did not appear to say anything during his first interactions with police suggesting a political or terrorism-related motive, though the official said it is still early in the process.

Jay Cohen was dropped off at the airport for a flight, and he arrived after the gunfire had already stopped, finding an unusual scene at the usually bustling facility.

"The airport was like a ghost town," Cohen, 51, a consultant, said in a telephone interview. "I didn't see anyone around."

It wasn't until he walked all the way up to the Delta counter without encountering a line or a single soul that he noticed about 20 people huddled together behind a nearby concrete wall. He peeked over the counter and saw the Delta employees on the ground trying to cover their heads with their hands.

As he looked around the terminal he previously thought was abandoned, he now could see people hiding under benches, squished up against windows. Then Cohen saw police running full speed through the terminal, some with guns drawn, others with their hands on their holsters, while police cars began screaming up to the curb.

"It went from eerie quiet from when I walked in to pure mayhem in just minutes," he said. "It was chaos."

Many of those at the airport expressed frustration with the lack of information Friday. Hundreds were stranded on the tarmac and not allowed off the premises for hours as authorities sought to clear the airport, looking for other danger.

Sophia Macris, 35, on her way to vacation in Florida, was still on her just arrived plane from New York when the shooting occurred.

"They held our plane on the tarmac," she said in an interview, still standing on the tarmac outside the terminal. "First, they told us there was fire alarm in terminal 2. Then they said emergency situation."

After the shooting, dozens of cars had pulled over onto the shoulder of nearby Interstate 595, as hundreds of people waited alongside the highway, family members and friends repeatedly trying to call loved ones who were scheduled to be on arriving flights.

Saintnatus Adition was pacing along the highway, police cars racing past with sirens blaring. His 71-year-old father had just landed from Haiti when the chaos began. "He called and said it got very busy all of the sudden," Adition said. He's been frantically calling him to find out if he's OK, but now he can't reach him. "Of course I am very scared," Adition said. "He is very old."

All flights were suspended following the shooting and the airport was closed, officials said. The airport had initially posted on Twitter about "an ongoing incident" at the baggage claims in one of the terminals, but did not provide further information. Airport representatives could not be immediately reached for further comment.

Officials at other major airports across the country, including those in Los Angeles and Chicago, said they were beefing up security in response to the shooting in Florida.

President Obama was briefed on the situation at Fort Lauderdale on Friday afternoon and will be updated as new information is available, according to Ned Price, spokesman for the National Security Council.

"This is a senseless act of evil," said Florida Gov. Rick Scott (R), who traveled to the airport to make his latestpublic remarks in the aftermath of a shooting rampage in his state.

"We have our units on site and around the perimeter to provide assistance and support, and we remain ready, willing, and able to provide additional assistance, support and resources," Fort Lauderdale Mayor John "Jack" Seller said in a statement. "Our community extends its thoughts, prayers, and support to the victims and their families."

The Federal Aviation Administration said shortly after 3 p.m. that flights were not being allowed to head to or from Fort Lauderdale, and some planes were diverted elsewhere in Florida. All flights originally scheduled for Fort Lauderdale have been grounded, according to the agency.

At the time of the shooting, former White House press secretary Ari Fleischer posted on Twitter that he was at the airport and saw people running after gunshots were fired:

Promoted
Listen to the latest songs, only on JioSaavn.com
Matt Zapotosky in Charleston, S.C.; Ashley Halsey III, Abigail Hauslohner and Dan Lamothe in Washington; and Michael S. Rosenwald in Fort Lauderdale, Fla., contributed to this report.