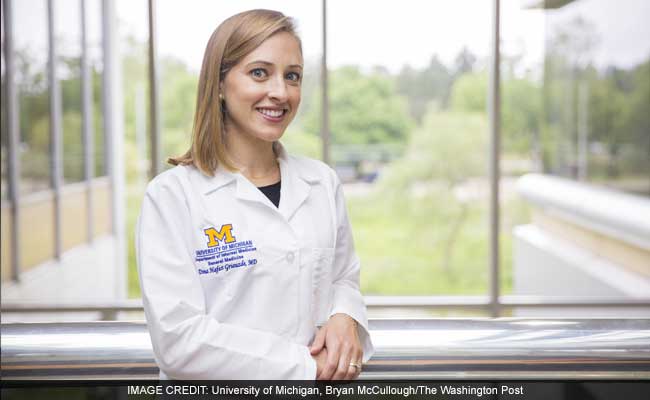 Dina Hafez, an internist and pediatrician, was part of the medical team was in the

As she and the rest of the medical team filed into the toddler's room at the University of Michigan's C.S. Mott Children's Hospital, Dina Hafez, a resident in internal medicine and pediatrics, feared the worst. The 2 1/2-year-old had been transported overnight from a rural facility because doctors could not figure out why he was getting worse.

Unable to walk, the quiet little boy with light brown hair cried when anyone touched his legs, which he held in an odd, froglike position. A rash blanketed his body. His gums were bleeding.

As a large teaching hospital and referral center for patients in the Midwest, "we see a lot of zebras," said Hafez, using medical slang for a diagnosis that is surprising and usually exotic. Now a Robert Wood Johnson Clinical Scholar at the VA Medical Center in Ann Arbor, Hafez was doing a month-long rotation in the pediatric intensive care unit in the spring of 2013. The most likely zebras, doctors initially suspected, were Guillain-Barre syndrome, which can cause rapid paralysis, or a cancer that was pressing on the spinal cord.

Either way, treatment looked long and arduous, and the outcome seemed far from certain.

But less than a week after the little boy arrived in Ann Arbor, he was bouncing back. By then, Hafez and her colleagues had a definitive diagnosis, one that was stunning in its simplicity.

"We were all really, really shocked," recalled Hafez, 32, lead author of a report about the case in a recent edition of the New England Journal of Medicine. "No one involved had even seen this before."

The little boy's problem had begun about six weeks earlier, Hafez said, when his mother noticed that he was having problems putting weight on his right leg. (The family was not identified in the NEJM report; Hafez said that they have moved and that hospital officials no longer have their contact information.)

A week after he began limping, the boy's mother took him to a pediatrician. The child had a speech delay and did not talk; his mother told the pediatrician that he had not hurt his leg. Other than a slight cough, he didn't seem sick. Although he was a picky eater - hardly unusual at his age - he was growing normally.

The pediatrician ordered an X-ray of the leg, which showed a possible fracture of the right fibula, the bone that runs between the knee and ankle. Because it wasn't clear that the bone was broken, an orthopedic surgeon recommended that the X-ray be repeated after the boy had rested his leg for a week. The second X-ray turned out to be similarly equivocal and soon afterward, the toddler began showing signs of pain in his left leg. Instead of walking, he reverted to crawling.

The boy's mother noticed another new symptom. His gums were swollen, and he had developed a black spot between his two front teeth. When she wiped it away, his gums began to bleed. Alarmed, the boy's parents took him to an emergency room.

In the ER, the toddler, who seemed agitated, did not move his legs. He had no fever, but his pulse seemed rapid. There were no bruises on his body, but because of uncertainty about whether he had a broken leg and whether it might be the result of abuse, child protective authorities were notified.

Doctors admitted the boy and ordered a CT scan of his head and legs. Scans showed neither a broken leg nor a head injury.

But his blood tests did hold a possible clue. He had mild anemia, which in toddlers is often the result of excessive milk consumption or an iron-poor diet. Such a finding can also indicate lead poisoning. His leg weakness, combined with anemia, also might mean that a cancerous tumor was compressing his spinal cord.

After MRI scans of his brain and spine revealed nothing, other diagnoses were considered. One was polio, which seemed highly unlikely because he had gotten all his immunizations. The other was Guillain-Barre, which can develop after a virus, but is very unusual in a child so young. A spinal tap was performed and revealed no sign of Guillain-Barre. But soon afterward, the little boy developed a petechial rash - pinpoint round spots that signal bleeding under the skin - which quickly blanketed his torso. Worried that he might have ascending paralysis, doctors decided to transfer him to the large children's hospital.

Hafez remembers that the little boy cried when a doctor touched his legs. "It wasn't clear whether he was frightened at being in a new place or in pain," she recalled.

The medical team was under pressure to figure out what was wrong; Guillain-Barre; necessitated close observation because it could paralyze his diaphragm, imperiling his ability to breathe.

Osteomyelitis, a serious bone infection that can cause leg pain, was considered. "That wouldn't affect both legs," Hafez said. "We were thinking of something more systemic," or a problem affecting his spinal cord. Among the possibilities: a form of juvenile arthritis.

The bleeding gums were "very worrisome" she said, and could suggest leukemia or lymphoma. Within hours, specialists from neurology, rheumatology, orthopedics, radiology and hematology/oncology, were involved. The plan included a nutritional assessment, a review of outside medical records and many, many tests and scans.

All lab tests were repeated, and doctors ruled out lead poisoning after a screen for heavy metal exposure, including lead, mercury and arsenic, showed nothing.

An HIV test was performed, as were biopsies of his bone marrow and muscles.

"Everything was coming back normal," Hafez recalled, "except for the iron studies," which showed mild anemia. "There was so much back and forth among the consultants, [and] it still wasn't clear what was going on."

On the fourth day of the boy's hospitalization, a neurologist and a radiologist recommended revisiting a question that had been raised soon after the boy's admission: his diet.

The radiologist had noticed bleeding beneath the top lining of the leg bone, which can result in severe pain. One cause of this kind of unusual bleeding is a decidiency of ascorbic acid - too little vitamin C.

Doctors began exploring a new and startling possibility: Did this toddler have scurvy?

Reports of scurvy date to 1550 B.C., but the disease is most commonly associated with sailors and pirates of the 17th and 18th centuries. Mariners on months-long voyages, chronically deprived of fresh produce containing vitamin C, would succumb to the disease, which could be fatal. Bleeding gums, severe joint pain, a petechial rash, leg weakness and, in children, the frog leg position (first described in the 1880s) are all signs of scurvy, which many people believe disappeared in the developed world centuries ago.

In 1753, a Scottish naval surgeon demonstrated that the disease, which had been erroneously attributed to bad meat or water, could be both prevented and cured by eating citrus fruit. By the end of the century, British sailors were given daily rations of lemon juice to prevent it.

The boy's parents, who had been at his bedside around the clock, had mentioned his picky eating. But when doctors zeroed in on the subject, the boy's mother responded that his diet consisted exclusively of chocolate milk - he drank about a quart and a half a day - and two to four graham crackers. He refused to eat anything else. A blood test revealed that his vitamin C level was less than 0.1 milligrams per deciliter; the low end of normal is 0.6 mg.

"A lot of kids have restricted eating habits," said Hafez, "but it's hard not to get any vitamin C."

The medical team also suspected that the boy's speech delay and his extreme aversion to foods might signal autism, which had not been diagnosed.

Cases of scurvy among children with autism are unusual but not unknown. In the past year, doctors in Etienne, France; Kansas City, Mo., and at Boston's Children's Hospital - which treated seven cases - have diagnosed scurvy in children and adolescents with autism. These children underwent extensive workups before the diagnosis was made.

In 2015, doctors at Baystate Medical Center in Springfield, Mass., reported that they had diagnosed 30 cases of scurvy during the previous five years, mostly among low-income adults, some with psychiatric problems. One patient told doctors he ate only white bread and cheese, while another consumed only ice cream. The disease is also sometimes diagnosed in elderly patients.

Hafez said she remembers the reaction when the boy's parents were told that their son had scurvy. "It was extreme relief," she said. "They thought he had some horrible disease." The boy's mother, she said, "laughed and cried at the same time and said, 'I can't believe this could be fixed by vitamins.' "

It was. The boy was started on vitamin C supplements, and within a few days, began moving his legs. Within a week, his gums stopped bleeding and his rash disappeared. Ten days later, he was walking normally. His parents were referred to a behavioral specialist, and the boy began taking a daily vitamin and consuming an enriched drink. Four months later, he had fully recovered.

"Had [a dietary] history been obtained earlier on," Hafez said, "we could have spared him this exhaustive workup," which included painful and expensive tests. One factor that seemed unusual, she said, was the fact that the boy was growing normally.

His case and the lessons it conveyed were the impetus for the NEJM report. Doctors at Michigan say they hope it will raise awareness of a disease that most physicians have never seen and that many mistakenly believe has been eradicated in the United States.

"I certainly make more of an effort to ask" about diet, Hafez said, and to refer families who need help to a nutritionist. The case, she said, underscores the need for doctors to "take a step back and look at all the pieces of a case as a whole and think about how they might fit together."