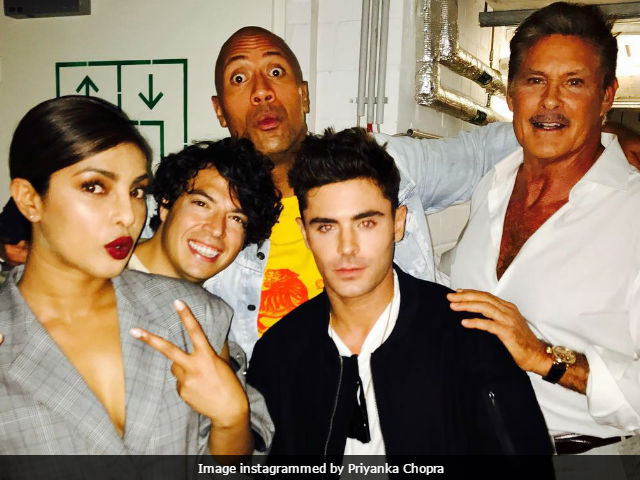 New Delhi: Priyanka Chopra's Berlin trip for Baywatch has fetched some really cool looks. The 34-year-old actress started with a dainty Marc Jacobs dress on day one and opted for an oversize pant suit by Public School on the second day of the promotions. Priyanka and co-stars are having tonnes of fun, as is evident from the pictures Priyanka has instagrammed. Priyanka and team Baywatch were joined by David Hasselhoff - the original Mitch Buchannon from the Nineties show which inspired the film - and everyone was thrilled. David Hasselhoff is of German decent and is a huge star there. He's starred in several German films and reality show Promi Big Brother, German version of Celebrity Big Brother. Dwayne Johnson plays David Hasselhoff's role in the film. Priyanka's mother Madhu Chopra and brother Siddharth also joined the team. Here are pictures from Baywatch's Berlin trip.

U were amazing @davidhasselhoff thank u for all the love.. you are and will always #BeBaywatch #baywatchinberlin

The Hoff is the sweetest. Thank u for Tshirts @davidhasselhoff #baywatchinberlin

Meanwhile, Baywatch, which failed to impress critics in USA -where it released last week - also failed miserably at the box office. Seth-Gordon-directed Baywatch, made in a budget of $60 million, has only recovered $23.1 million from ticket sales, reports AFP. Johnny Depp's Pirates Of The Caribbean: Dead Men Tell No Tales, which releases along with Baywatch, is movie-goer's favourite, having collected $78.5 million so far.

Baywatch will release in India on June 2.