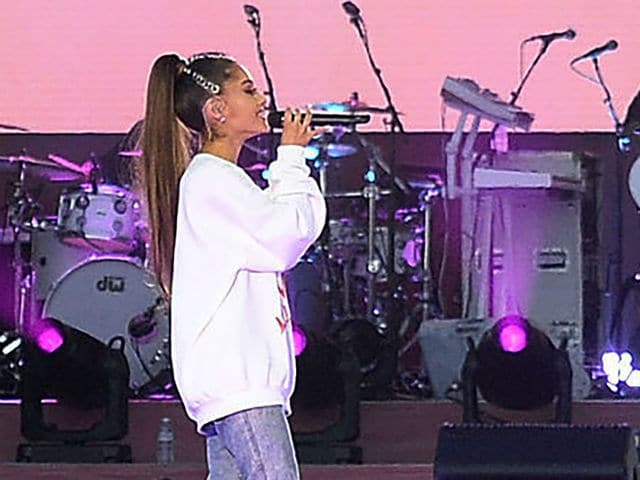 Manchester: Cheers drowned out tears in Manchester on Sunday as Ariana Grande was joined by fellow music stars for a charity concert where fans vowed to face down fears of terrorism after two deadly attacks in Britain. "Let the world hear your resilience," Pharrell Williams told a sell-out crowd of 50,000 who had gathered to remember victims of a May 22 suicide bomb attack on Grande's concert in the city. The hastily-organised "One Love Manchester" event became one of the biggest single gatherings of musical talent this year, as stars lined-up for the concert dedicated to the 22 people killed and 116 injured, many of them children.

Justin Bieber, Miley Cyrus, Katy Perry, Robbie Williams, Take That, Liam Gallagher, and Little Mix were among those who hit the stage, as fans held "We stand together" and "For our angels" signs. 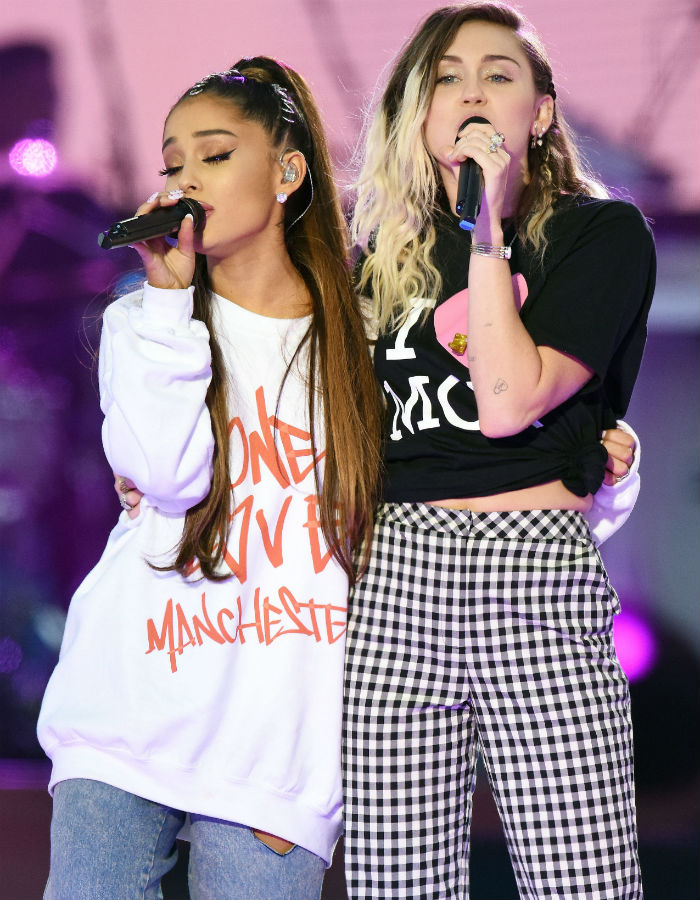 Ariana Grande and Miley Cyrus perform at One Love Manchester 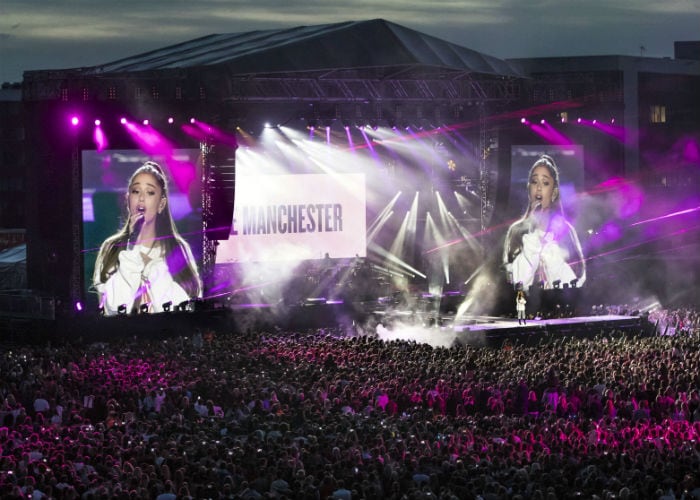 Mumford & Sons frontman Marcus Mumford opened the show after the crowd fell silent for a minute.

Less than 24 hours before the concert got underway, Britain was rocked by another terrorist attack, in central London, in which seven people were killed and 48 injured.

Grande tweeted "Praying for London" while her manager Scooter Braun said the concert would go ahead "with greater purpose".

Fans flocked to the Old Trafford cricket ground for the show, many of them with tears rolling down their cheeks during the performances.

In one heartfelt moment, Grande was joined on stage by children from a local school, some of whom were at the targeted Manchester Arena concert, as the group performed her hit song My Everything.

Grande and Coldplay's Chris Martin performed Don't look back in anger, the track by Manchester Britpop band Oasis which crowds sang during vigils in the days following the bombing.

Additional security measures were put in place for the concert, with police warning that everyone would be searched.

But there was also a jovial atmosphere, as police officers and security guards danced with music fans.

Revellers dressed for the occasion, with many wearing tops featuring a bee -- a symbol for Manchester -- and slogans expressing their love for the city.

"We're here to show our support to Manchester more than anything. These people aren't going to dampen our spirits," said 34-year-old Abdullah Mala.

His eight-year-old daughter Hannah had left the Grande concert just before the deadly bombing and said she was "happy to be back" to see some of pop's biggest names.

Proceeds from the concert will be donated to a fund set up to help the victims' families.

Rachel Jea, 32, said she was at Grande's previous Manchester concert and felt it was important to attend Sunday's show to regain trust after the bombing.

"Our grandparents went through world wars so that we could live in freedom and now it's starting again. It just shouldn't be like this," she told AFP.

Her nine-year-old daughter Scarlet adopted a defiant tone, telling others not to be afraid. "We need to try and find a way to overcome the fear. I'm really happy to come tonight, it is good for Ariana, it wasn't her fault what happened."

Grande, who described herself as "broken" following the May 22 bombing, had immediately returned to the US, interrupting her Dangerous Woman world tour and later promising to return for the charity concert.

On Friday the 23-year-old singer made a surprise visit to injured fans being treated at the Royal Manchester Children's Hospital.

Sunday's concert was held on the eve of the first funeral of Manchester attack victims.

The coffin of Eilidh MacLeod, a 14-year-old victim of the bombing, was flown to the Scottish island of Barra and carried across a beach by mourners on Sunday ahead of the funeral.

Those who had attended Grande's May 22 concert were offered free tickets to the Sunday show, while the 35,000 tickets put up for sale on Thursday at £40 each ($51, 46 euros) sold out in minutes.

"Over 10,000 unscrupulous applications", however, were made for free tickets, Ticketmaster said, with people applying despite not having attended the original concert.

Others tried to resell their tickets on eBay for £1,200. The online auction platform has since then pledged to immediately remove any item "which profits in any way from the tragedy in Manchester".

The BBC, Twitter, Apple, YouTube and MTV streamed the concert live, making it available to viewers in 180 countries.


(Except for the headline, this story has not been edited by NDTV staff and is published from a syndicated feed.)
Comments
Ariana GrandeJustin BieberKaty Perry