The complex web of commercial ties under threat has raised the prospect of a global trade war, sending financial markets tumbling. 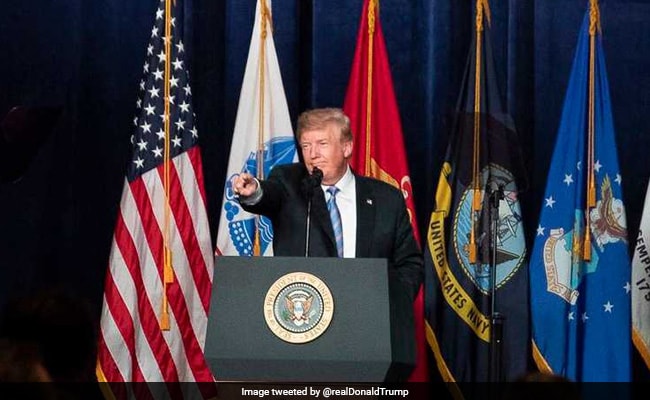 The United States launched what China called the "largest trade war in economic history" between the world's top two economies Friday, imposing tariffs on goods worth around $34 billion annually.

The US-China spat is one of several trade fights picked by the protectionist President Donald Trump as his "America First" agenda clashes with free-trade relations with traditional allies.

The complex web of commercial ties under threat has raised the prospect of a global trade war, sending financial markets tumbling.

Here is a summary of Trump's trade conflicts:

After weeks of apparently fruitless negotiations, the US imposed tariffs on approximately $34 billion of Chinese products, sparking an immediate response from Beijing, which said it would hit back but did not provide details.

The tariffs may just be the first shot in a ballooning war, as Trump has warned that he could ratchet up the measures to include $450 billion in goods -- the vast majority of all of China's exports to the United States.

Already a second tranche of tariffs on $16 billion in products is under review and could soon be added to the US measures.

The US tariffs target a wide range of Chinese goods-- including aircraft parts and computer hard drives-- that Washington says have benefited from unfair trade practices.

On June 1, Trump made good on several months of threats and imposed tariffs of 25 percent on steel imports from the EU, along with 10 percent on aluminium imports.

Trump has said the European Union is "possibly almost as bad as China" when it comes to trade, as a raft of retaliatory tariffs from Brussels came into effect on June 22.

From blue jeans to motorbikes and whiskey, the EU's hit-list of products targeted the most emblematic of American exports.

Europe is also worried Washington will follow up on a threat to impose punitive levies on imported cars, something the powerful German car industry particularly fears.

However, signs of a possible thaw emerged on July 5 when the US ambassador in Berlin told bosses at Germany's biggest car firms that Washington was calling on the EU to bring tariffs to zero on car imports -- in exchange for equal treatment.

Canada and Mexico, both members with the US of the North American Free Trade Agreement (NAFTA), have not been spared the Washington offensive on steel and aluminium, and are threatening their own reprisals.

Trump and Canadian Prime Minister Justin Trudeau traded barbs over the steel tariffs at a farcical summit of the G7 richest countries that ended on June 9.

Meanwhile talks among the three NAFTA signatories, launched after Trump demanded an overhaul of the "terrible deal", have snagged notably owing to US demands to increase American content installed in duty-free autos.

Japan is another target of Trump's steel tariffs, which Tokyo calls "extremely deplorable".

It has informed the World Trade Organization (WTO) that it plans to impose retaliatory measures on US goods to the tune of 50 billion yen (395 million euros, $455 million), after failing to persuade Washington to exempt it from the tariffs.

In March, Washington and Seoul announced an agreement on a renegotiated free trade accord, giving US carmakers greater access to the South Korean market.

Trump argued the original deal from 2012 was lopsided in Seoul's favour, but has also clouded the issue by appearing to link trade concessions to progress in his separate track of talks with nuclear-armed North Korea.

Russia, also hit by the US steel tariffs, has informed the WTO that it is planning its own retaliation.

Trump announced in May he was abandoning the 2015 nuclear deal with Iran -- which will mean new sanctions on Tehran and punitive measures for those who trade with it.

Several companies -- including Total and Peugeot of France, and Russia's Lukoil -- have said they are preparing to exit Iran before US deadlines, the last of which is November 4.