Soon after his suspension was revoked, the BJP leader said he worked for the party even during the period when he was suspended from the party. 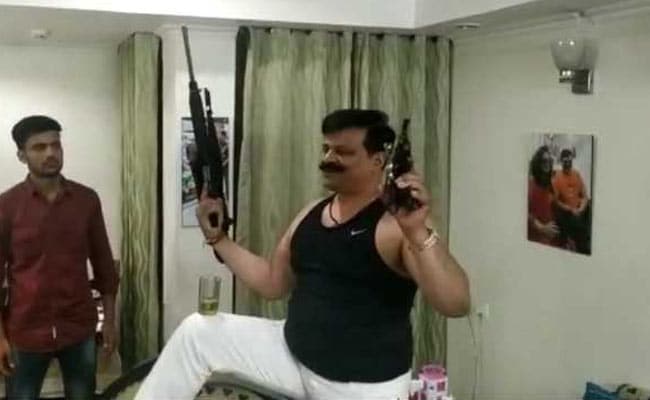 Last year, a video surfaced in which Pranav Singh Champion was seen dancing with guns.

The BJP on Monday revoked the suspension of controversial Khanpur MLA Kunwar Pranav Singh Champion from the party.

"Champion's suspension was revoked after he apologised for his conduct," Pradesh BJP president Bansidhar Bhagat announced after welcoming him back to the party.

The decision to revoke his suspension was taken collectively by the core committee of the party based on the legislator's conduct during the last 13 months of his suspension, he said.

Mr Champion was suspended from the party in June last year initially for three months on charges of breach of party discipline which was extended indefinitely just a month later after a video surfaced in which he was seen dancing with guns in hand to popular Bollywood songs.

Soon after his suspension was revoked, Mr Champion said he worked for the BJP even during the period when he was suspended from the party.

He also offered an apology before the press for his misconduct.

"I was sorry then and I apologise again today with folded hands for what I did. But even during the 13-month period of my suspension I worked for the programmes and policies of the BJP," Mr Champion said.

Over 2,500 Arrested In Assam Crackdown On Child Marriage