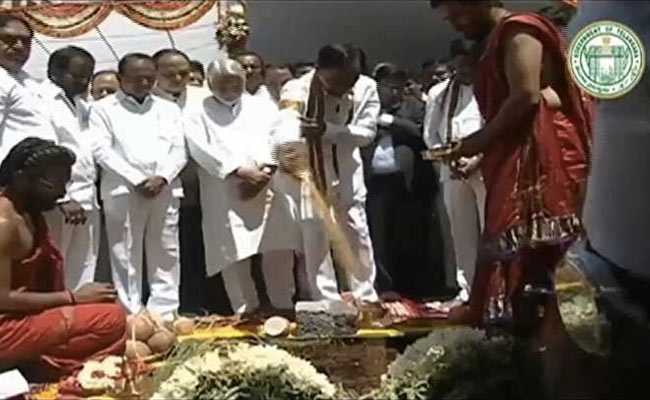 Several opposition leaders in Telangana, including Ramchander Rao of BJP and Hanumantha Rao of Congress, who were protesting the TRS government's move to construct a new Secretariat by demolishing the existing buildings were detained today.

Chief Minister K Chandrasekhara Rao laid the foundation stone for the complex earlier in the day.

Ramchander Rao and Hanumantha Rao, among other opposition leaders, were detained and not allowed to leave their houses.

Some BJP protesters who were able to reach the secretariat were also taken into custody by the police.

He also informed that Andhra Pradesh Chief Minister Jagan Mohan Reddy was ready to hand over his state Secretariat's two buildings in Hyderabad to the Telangana Rashtra Samithi government.

Ramchander Rao, BJP MLC, said, "There is no point in demolishing the present Secretariat buildings and reconstructing them. They are just 10 years old and have a long life too. There are many government buildings that are in serious need of maintenance. The TRS is spending 500 crores in the reconstruction of the buildings that are currently in good condition. It is a total waste of money."

The Telengana Chief Minister this month had also said that the new buildings will be constructed at an estimated cost of Rs 400 crore, while Rs 100 crore will be spent on the construction of Assembly compound.

"In the name of Vastu, this government is wasting 600 crore rupees out of the pocket of our hardworking taxpayers. I appeal to CM that if he has to spend 600 crores, spend it on uplifting poor people who do not have a roof over their head. CM should fulfill his promise of constructing 2 lakh new houses instead.", BJP MLA Raja Singh told ANI.

The decision of the government to construct new buildings in the existing site came after the Union government had denied permission for construction at the Bison Polo ground.