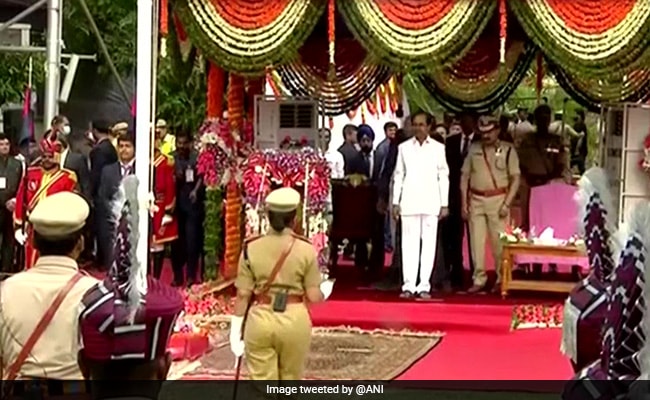 Mr Rao had earlier said that the formation of Telangana was made possible due to the sacrifices made by people, and it has been built with the same spirit.

In its report on the occasion of the state formation day, the government laid down the schemes that have benefitted a large chunk of the population in the state through Shaadi Mubarak, KCR kits, Kalyana Laxmi, Rythu Bima, Rythu Bandhu, Aasara pensions among others.

Telangana was officially formed on June 2, 2014, and the day is celebrated as Telangana Day or Telangana Formation Day.

Meanwhile, Prime Minister Narendra Modi greeted the people of Telangana on the occasion and said that Telangana is synonymous with hard work and unparalleled dedication to national progress.

Union Minister G Kishan Reddy, who hails from Telangana, said that BJP will fulfil the dreams of the people of Telangana.

"Today Central Government is working for Telangana's development. I have full trust that under PM Modi's leadership, Telangana will move forward on the path of development. BJP will fulfil the dreams of the people of Telangana," Mr Reddy told ANI.

The Union Minister also hoisted the national flag at his official residence in New Delhi on the occasion of Telangana Formation Day.

The Ministry of Culture will organize Telangana Formation Day celebrations in Delhi on June 2 and Union Home Minister Amit Shah will be the chief guest at the event, officials said on Tuesday.

On State Formation Day, KCR Says Telangana A Role Model For The Country