In the photograph, the cop can be seen sitting on a bench and playing with the baby 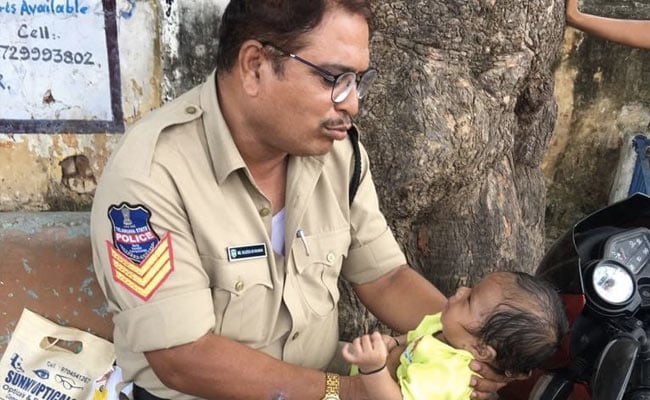 Head constable Mujib ur Rahman has done his best to educate his two children.

When a young mother was forced to bring her four-month-old to the exam centre, a Telangana policeman offered to help. He took care of the baby while the mother wrote her exam. The heartwarming photograph of the cop trying to comfort the crying baby outside the exam centre was shared by IPS officer Rema Rajeswari on Twitter.

In the photograph, the cop can be seen sitting on a bench and playing with the baby.

Head constable Mujib ur Rahman is posted at Moosapet police station in Mahbubnagar district of Telangana. He was deployed at the examination centre at Boys Junior College, Mahbubnagar as part of the security arrangement for the police constable examination today.

The woman, Mr Rahman said, belongs to an underprivileged family and desperately needs a job. She is a post-graduate, but failed to get a decent job, he told NDTV. She aspires to be a police constable now.

"She brought the baby to the centre and a 14-year-girl was made in charge. But the baby kept crying. So I tried to cheer him," Mr Rahman said.

The 48-year-old policeman has two children and he has done his best to educate them. His son is studying medicine in China and daughter will finish school next year.