All the 17 segments, including Nizamabad that saw over 170 farmers contesting demanding remunerative price for their produce, went to polls in the single phase and till 5 pm, 60.57 per cent voting was recorded. 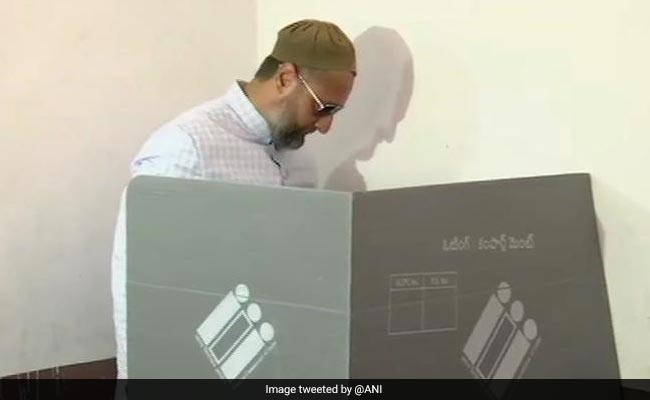 An estimated 61 per cent of voters cast their ballot Thursday in Lok Sabha elections in Telangana, exercise passed off peacefully, officials said.

All the 17 segments, including Nizamabad that saw over 170 farmers contesting demanding remunerative price for their produce, went to polls in the single phase and till 5 pm, 60.57 per cent voting was recorded.

He said the final voting percentage would be given Friday.

While the ruling TRS has exuded confidence in doing well in the Parliamentary elections on the back of its sweep in the recent assembly elections, the Congress and BJP look to make a dent in the largely three-cornered contest.

Medak recorded highest number of voter turnout with 68.60 per cent while Secunderabad was the lowest at 39.20 per cent, till 5 pm.

Film actors Chiranjeevi, Ram Charan, Allu Arjun, junior NTR and ''Baahubali'' director SS Rajamouli were among the other prominent people who exercised their franchise in the polls.

KCR, along with his wife Shobha cast his vote in Chintamadaka village in Siddipet district.

Rajat Kumar said there was no polling booth in the state which registered zero per cent voting, denying reports that three or four villages had called for boycotting polls.

Polling booths in Teeleru village in Narayanpet district where ten women labourers were buried alive when loose soil and boulders fell on them Wednesday, wore a deserted look.

A senior Narayanpet district official told PTI that less than 30 voters, as against over 1,000 eligible ones, turned up to vote in the village.

"In Telangana, there are several instances of EVMs not working," he claimed.

Teams deployed to fix the EVMs when they were not functional should have been technically more efficient, Rao said, adding, at many places, even though there were three EVMs in a booth, only one or two were functioning.

Apollo Hospitals Group Executive Vice Chairperson Shobana Kamineni Thursday said her name was missing in the voters'' list and described it as "worst day as an Indian citizen."

Reacting to this, Rajat Kumar said he has ordered an enquiry into the incident and an appropriate action would be taken based on the report.

Polling in 16 constituencies began at 7 am, while voting process in Nizamabad started an hour later in view of more time required for mock polling due to the presence of 185 candidates.

Over 2.97 crore voters were eligible to exercise their franchise in the state, where 443 candidates were in fray.

In 13 Left Wing Extremism (LWE)-effected assembly segments under five parliamentary constituencies polling was conducted from 7 am to 4 pm.

In Nizamabad Lok Sabha constituency more than 170 farmers are among those in the contest.

The farmers are seeking to highlight their demand for remunerative price to turmeric and red jowar, and setting up of a Turmeric Board based in Nizamabad.

As many as 145 companies of central paramilitary forces, besides over 55,000 state police were deployed for security arrangements in the state.

The Congress in Telangana alleged the TRS government deposited money under its farmers'' investment support scheme two days ahead of Thursday's Lok Sabha elections in the state, and described it as a "serious violation of election code".

The party also accused the Election Commission of not withholding the release of Chandrasekhar Rao's biopic well in time.

State BJP president K Laxman claimed anti-incumbency has risen against the TRS government as seen in the ruling party''s defeat in the recent MLC polls.

Claiming that Congress and TDP are "gradually vanishing" from the state, he told reporters BJP stood as the main competitor to TRS.