Telangana Minister KT Rama Rao on Thursday held a series of meetings with the top leadership of various companies in London. 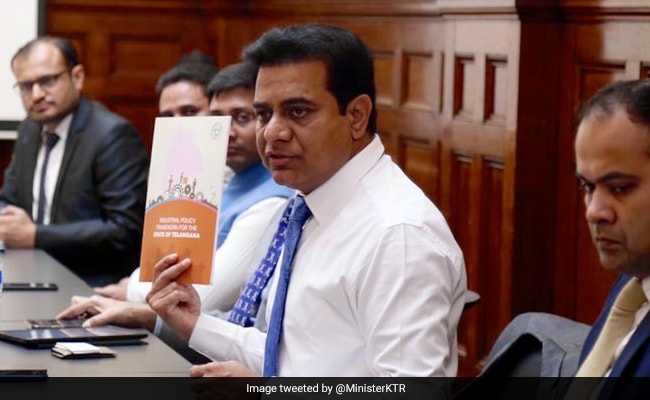 Telangana Minister KT Rama Rao on Thursday held a series of meetings with the top leadership of various companies in London.

In a round table meeting organized by the UK India Business Council and the Society of Motor Manufacturers and Traders (SMMT), KTR interacted with automobile industry leaders and pitched the state as an investment destination. The Minister stated that Telangana is one of the front runners in the EV revolution.

During the session, the Minister mentioned that Telangana has launched a comprehensive and progressive EV Policy.

He stated that several marquee EV companies have already chosen Telangana to set up their facilities.KTR said that the state ranks top in Ease of Doing Business (EoDB) rankings and has a strong ecosystem in Defence R&D.

During the day, noted British Indian Businessman and President of the Confederation of British Industry Lord Karan Bilimoria hosted KTR at the UK Parliament.

The Minister later interacted with MPs, representatives of CII and CBI, and Indo-British APPG. During the interaction, the Minister informed the MPs, and other participants about the initiatives of Telangana and stated that the state and Hyderabad are preferred investment destinations for IT, Life Sciences & Pharma, Aerospace & Defense and Food Processing Sectors.

The Minister held a meeting with a delegation from W Midlands India in London yesterday. The Minister highlighted that India has the best think force in the world and due to its demographic dividend offers ample skilled youth.

"When you choose India for your investment, it is important that you choose the right gateway. Telangana is that state which has the best policy environment and also a progressive leadership," said KTR.

In another meeting, Paul Macpherson and Brad Hilborn from the Technology and Strategic Services Group of HSBC met Minister KTR in London.

"HSBC has a strong presence in Hyderabad. I'm happy to see HSBC reiterate its commitment to do more business in Telangana," said KTR.

"Glad to learn that the company wishes to make more investments in the state in diverse areas like solar, energy storage and EVs," the Minister said.