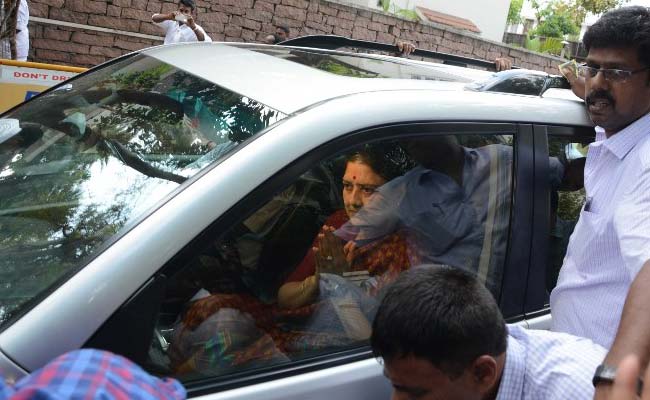 Bengaluru: It has been a week since AIADMK general secretary VK Sasikala was convicted in a two-decade old corruption case and ordered to serve a four-year sentence in prison by the Supreme Court. Ms Sasikala, whose chief ministerial ambitions were crushed after the conviction, returned to the Central Jail in the southern outskirts of Bengaluru a week ago to complete the remainder of her sentence. However, the 61-year-old hopes to get better facilities in view of her age and poor health, according to a party leader.

"Chinamma is fine, though weak. Her sugar level and blood pressure are normal. She is adjusting to the prison life. She has applied for better facilities. We hope she gets them," said V Pugazhendi, secretary of the AIADMK's Karnataka unit, to news agency IANS.

"We are hoping the authorities will consider her request for better amenities like a cot, mattress, table fan and attached bathroom so that she can take care of her health till she gets transferred to the Central Jail in Chennai," she added. Ms Sasikala's similar requests of home cooked food and mineral water were denied by authorities.

Karnataka's Director General of Prisons HL Satyanarayana Rao said that there was a legal provision for a convict to seek transfer to another jail if the superintendent considers a request on health or humanitarian grounds.

Ms Sasikala, along with Tamil Nadu Chief Minister J Jayalalithaa, had spent a few weeks in jail after a lower court in Bengaluru convicted them in the assets case in 2014. They were released after the court's decision was overturned by the Karnataka High Court.

Presently, she is serving the remainder of her sentence alongwith her sister-in-law Elavarasi and her nephew VK Sudhakaran. However, the sentence could be extended should she fail to pay her hefty Rs 10 crore fine.

Ms Sasikala and Ms Elavarasi are in adjacent cells and guests are allowed to meet only twice a week between 10 am and 5 pm. Karnataka's Director General of Prisons said that they were treated like every other inmate.

Ms Pugazhendi said that the AIADMK chief has come to terms with prison life.

"As Ms Sasikala had spent three weeks along with Amma in the same over two year ago, she is familiar with the harsh conditions in the women's cell," she said.

Promoted
Listen to the latest songs, only on JioSaavn.com
Ms Pugazhendi also stated that Tamil Nadu Chief Minister E Palaniswami is likely to meet Ms Sasikala next week, along with her lawyers to discuss provisions for her transfer.