No Visitors, No Politics, No Poes Garden As Sasikala Gets 5-Day Parole

Sasikala's husband, M Natarajan, 74, had a liver and kidney transplant on Wednesday.

VK Sasikala has been granted five-day parole to travel to Chennai and visit her husband in hospital.

Chennai: VK Sasikala left a Bengaluru prison today, nearly eight months after she was jailed for corruption, on five-day emergency parole to travel to Chennai and visit her husband in hospital.

For the brief outing, Sasikala had to accept conditions; in Chennai, she has to live at the home of her sister-in-law Ilavarasi, who was also jailed with her. The 61-year-old also has been banned from any political activity or statements to the media.

She has also been told that she can't have visitors either at home or in the hospital.

Her nephew TTV Dhinakaran arrived this morning at the Bengaluru Central Prison with a group of supporters and waited till she came out, waved to the public and drove off in a car.

Sasikala and Dhinakaran were sidelined by the AIADMK recently in a power struggle that erupted days after former Chief Minister J Jayalalithaa's death in December. A section in the AIADMK that supports her is elated about her "homecoming". 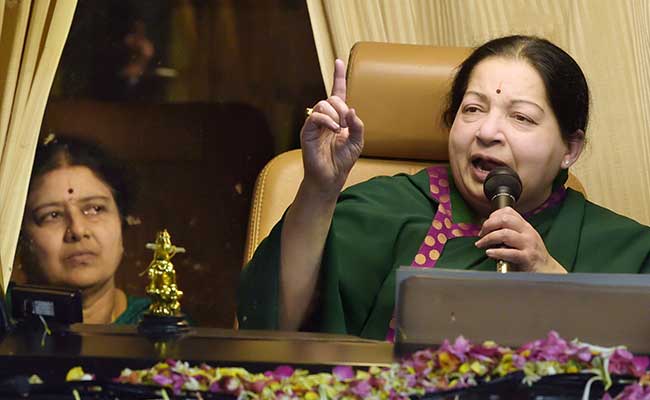 VK Sasikala installed herself as AIADMK chief after Jayalalithaa's death in December.

"Sasikala will only look after her husband like a good wife. She will not meet anyone, no political agenda, no strategizing," said Apsara Reddy, a spokesperson of her camp.

Sasikala was the closest aide of Jayalalithaa and shared her upscale Poes Garden home in Chennai for decades. She installed herself as AIADMK chief after Jayalalithaa's death and was about to try and take over as Chief Minister in February when the Supreme Court sentenced her to four years in jail for corruption in a case dating back to the 1990s.

A faction headed by O Panneerselvam, which had broken away from the AIADMK over Sasikala's takeover, returned in August after the party resolved to distance itself from her and her nephew.

One of the terms of the reunion was that Jayalalithaa's Poes Garden home, Veda Nilayam, will be turned into a memorial. Which means it is out of bounds for Sasikala, who had noted it down as her address in jail records.

Promoted
Listen to the latest songs, only on JioSaavn.com
Sasikala's husband, M Natarajan, 74, had a liver and kidney transplant on Wednesday. He was admitted to hospital last month after multiple organ failure.

In jail, Sasikala has remained in the news over allegations that she paid Rs 2 crore for VIP facilities like special meals, a suite of rooms and a flat-screen TV.