Jallikattu: Hope These Are Actors, Not Cops, Says Kamal Haasan About Chennai Videos

Chennai: Actor Kamal Haasan said today that a series of videos uploaded on social media that show policemen indulging in arson in Tamil Nadu has left him "shocked".  NDTV cannot verify the authenticity of the videos, which have been tweeted by Kamal Haasan and other celebrities like actor Arvind Swamy. "I hope some sort of reasonable explanation is given to us which will calm us down," said Kamal Haasan at a press conference today in Chennai, which saw spasms of violence yesterday after a week-long protest demanding the return of Jallikattu, the bull-taming sport, came unhitched from a resolute peace maintained by thousands of participants who camped out at Marina Beach.

"The double standards are what we are questioning," said the 62-year-old actor, referring to the videos that show a policeman setting an auto on fire and hitting women with sticks. "I hope they are actors and not originals," he said of the uniformed men in violent action.

Like most other Tamil public personalities, and lakhs of ordinary people, Kamal Haasan ardently backed the students who rallied social media to organize a mass demonstration at Marina Beach which declared itself apolitical. The numbers swelled to 15,000 without any incidents of harassment or confrontation with the police. 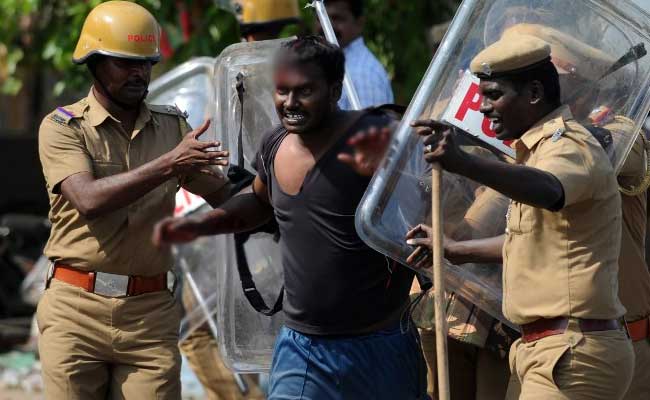 Police said they were attacked with stones and slippers and had to resort to lathi-charge to disperse the protesters who resisted the eviction order. (AFP photo)

Then, last morning, the police used lathis or batons to force students to disband. The landmark had to be vacated for Republic Day, said the cops, urging the students to truncate their protest because their movement had led to Tamil Nadu amending a law to allow Jallikattu, banned in 2014 by the Supreme Court.  Initially, the students resisted. Stones and slippers were flung at policemen, though senior officers blamed "outsiders" for "infiltrating" the area to provoke disorder.  Nearly 50 police vehicles were set on fire and a police station was vandalized.

By 3 pm, the students said they had ended their demonstration and those who remained at Marina Beach were not among their ranks. By then, the city was gridlocked with traffic jams in some parts. Public transport was not available. Students and parents walked miles to get home.

Promoted
Listen to the latest songs, only on JioSaavn.com
The videos of the policemen inciting violence went viral by the evening. After originally declaring that they appeared "morphed," senior police officers said the footage will be investigated. 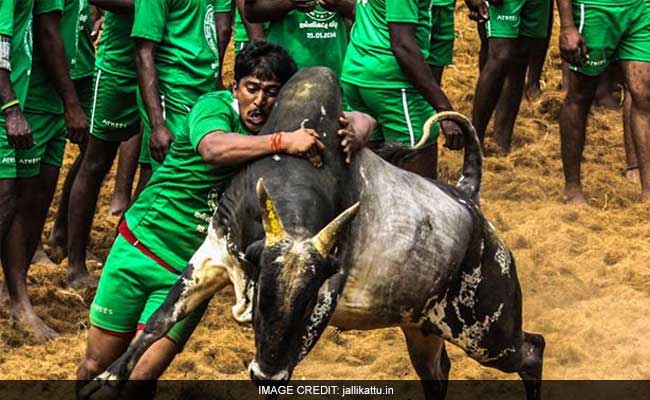 The bull-taming sport is organised in many parts of Tamil Nadu during the harvest festival of Pongal.

Jallikattu, which sees young men competing in an open field to mount a bull and remain atop it for three jumps, was forbidden by the Supreme Court in 2014. Last year, the centre allowed it, but animal rights activists challenged the decision in the top court. That meant that this year, Jallikattu could not be held officially along with the harvest festival of Pongal. Local groups organised it anyway, and hundreds were arrested. That served as the inception point for huge demonstrations across the state demanding that the sport be recognised as an integral part of Tamil culture. Kamal Haasan and others have said that while cruelty to bulls should be punished, those who abuse the animals are anomalies and the sport cannot be banned because of them.

Animal rights activists say bulls are taunted with chills, doped with alcohol and then left to the mercy of mobs that sometimes break their tails in trying to wrestle them.