The statue was on Monday found smeared with cow dung and eyes ''blindfolded'' with what appeared to be a black paper at Pillayarpatti, about 12 km from Thanjavur. 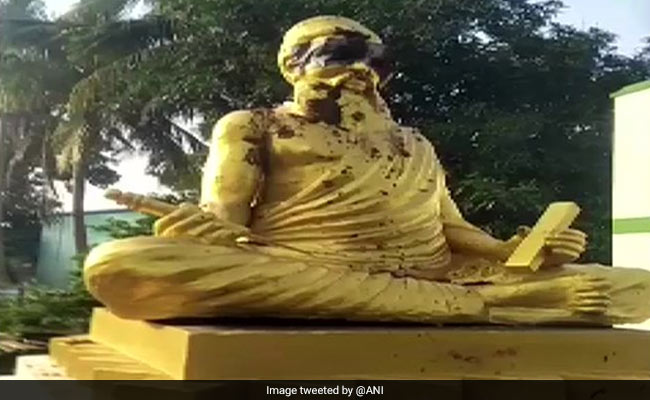 Case has been registered and special teams are on the job to arrest the miscreants: Cops

Unidentified people desecrated a statue of saint-poet Thiruvalluvar leading to outrage with opposition parties including the DMK and local people demanding action to bring the culprits to book.

The statue was on Monday found smeared with cow dung and eyes ''blindfolded'' with what appeared to be a black paper at Pillayarpatti, about 12 km from Thanjavur.

As soon as word spread about the desecration, local people took to the streets demanding immediate action to catch those involved.

Vallam DSP Seetharaman rushed to the spot and conducted an inquiry. The Tamil University police registered a case and formed a special team to arrest the miscreants.

Inspector General of Police V Varadaraju told reporters
a case has been registered and special teams are on the
job to arrest the miscreants.

"Expeditious action is being taken to apprehend the culprits," he said.

A case under four IPC sections including promoting enmity between different groups, making imputations, prejudicial to national integration, insult with intent to provoke breach of the peace was registered, the IGP said.

On November 1, the BJP's Tamil Nadu unit on its twitter handle had written a couplet from Thiruvalluvar's classic "Thirukkural," questioning the utility of education if the Almighty was not worshipped.

Tagging the couplet, the party targeted the Dravidar Kazhagam, DMK and the Left parties for allegedly deriding God and for berating the believers and posed "what is the use of their education."

Also, the party had posted a picture of Thiruvalluvar in saffron robes with sacred ashes on his forehead.

Usually, the image of Thiruvalluvar is in white robes in State government offices without any religious symbols.

Such photographs are widely used by others as well.

Hitting back, MK Stalin in a tweet asked the BJP to not paint the poet in saffron and instead learn Thirukkural and change its attitude.

The Left parties too targeted the BJP for "saffronising Thiruvalluvar."

The BJP party leaders maintained that Thiruvalluvar had all along been in saffron robes till the DMK brought in the white robes in 1970.

The BJP's twitter handle also posted a copy of Thirukkural published in 1885 which featured Thiruvalluvar as a Hindu saint with prayer beads in his hand and fingers positioned in a yogic mudra.