DMK patriarch M Karunanidhi's son MK Stalin said that there was improvement in his health.

Karunanidhi is being treated for urinary tract infection with intravenous antibiotics and fluids.

Former Tamil Nadu chief minister and DMK patriarch M Karunanidhi is recovering from a fever steadily and he is being treated at his home in Chennai. Prime Minister Narendra Modi spoke to his son MK Stalin and daughter Kanimozhi, both DMK leaders, to ask about his health, and offered all help.

Spoke to Thiru @mkstalin and Kanimozhi Ji. Enquired about the health of Kalaignar Karunanidhi Ji and offered any assistance required. I pray for his quick recovery and good health. @kalaignar89

Speaking to reporters, Mr Stalin said, "There is good improvement in the health condition of Kalaignar. The infection has come down a lot."

In tweets, he also paid tribute to his father and said he had overturned "countless obstacles" into accomplishments.

"Karunanidhi has overturned countless obstacles, failures and betrayals into accomplishments. Let's follow his footsteps. Karunanidhi has spent 80 years in public life, 70 years in cinema and arts, 50 years as DMK Chief," Mr Stalin tweeted. The fever is coming down, he added.

Mr Karunanidhi is being treated for fever due to urinary tract infection with intravenous antibiotics and fluids.

Since yesterday, a stream of politicians has been visiting the 94-year-old DMK chief, who has been unwell for more than a year and has been tube-fed for some time. His family has reportedly decided against admitting him in hospital and wants his treatment at his home in Gopalapuram.

Mr Karunanidhi is being treated by a team of doctors, a health bulletin from Kauvery Hospital executive director Aravindan Selvaraj said. He said the politician was being provided hospital-level care at home and strongly advised the family to restrict visitors. 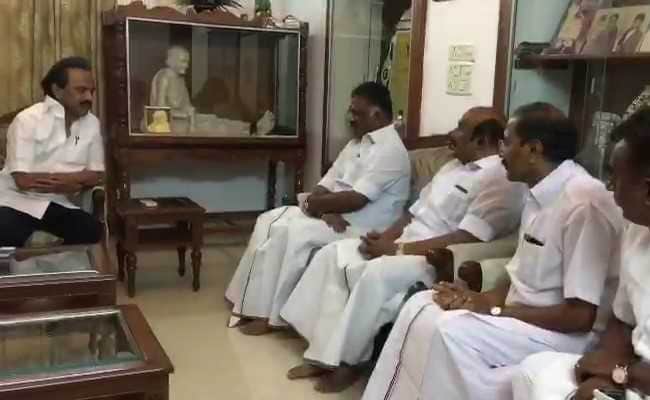 In tweets, MK Stalin also paid tribute to his father and said he had overturned "countless obstacles" into accomplishments.

The five-time chief minister of Tamil Nadu is rarely seen in public and is mostly in his wheelchair during his rare outings. His son MK Stalin, 65, is working president of the party founded by his mentor CN Annadurai in 1949. Mr Karunanidhi's daughter Kanimozhi is a Rajya Sabha Member of Parliament.

Mr Karunanidhi had returned home recently after a short hospital stay. Politicians -- friends and rivals both -- have visited Mr Karunanidhi.

Deputy chief minister O Panneerselvam and actor-politician Kamal Haasan called on him late on Thursday evening after doctors reported a "slight decline" in his health. Mr Haasan had received an offer from Mr Karunanidhi to join politics back in 1993.

Mr Jayakumar said it was "political decency" for the ruling party to visit the opposition leader's residence, recalling that a DMK delegation had extended a similar courtesy to AIADMK matriarch J Jayalalithaa when she was in hospital in 2016.