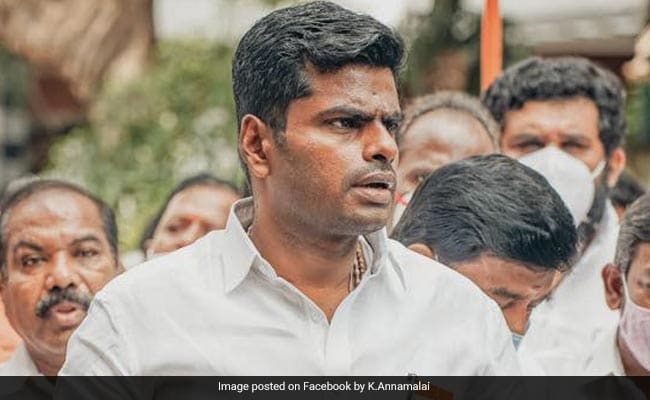 Tamil Nadu BJP leaders said that there is no compulsion to learn Hindi to prove one is an Indian and said the ancient Tamil language could qualify to become the national link language.

Tweaking the Tamil pride in the Dravidian heartland where the ruling DMK and opposition AIADMK are on the same page in opposing Hindi or Sanskrit, an act viewed by those parties as imposing the language on the Tamils, the BJP state chief K Annamalai said his party would neither accept nor allow thrusting Hindi on the people of Tamil Nadu.

"There's no compelling situation to learn a language and prove that one is an Indian. One can learn Hindi or any language when it concerns employment or livelihood issues," Mr Annamalai said and claimed that even Prime Minister Narendra Modi expected everyone to learn in their regional languages.

"There is no need to hate any language but replacing Tamil with Hindi or any language is unacceptable," claimed former Union Minister Pon Radhakrishnan. Speaking to PTI on Wednesday, he said the Prime Minister himself had acknowledged (in February 2018) that Tamil is the oldest language and is older than Sanskrit and is beautiful. "In fact, the Prime Minister advised the non-Tamil students to learn Tamil," Mr Radhakrishnan said.

Tamil, which is an administrative language in few countries, could qualify to become a link language of India, and steps should be taken in this direction, the former Union Minister said. English, he said, is a universal choice for education and employment.

Speaking in a similar vein, Mr Annamalai claimed that Hindi is optional in the Centre's National Education Policy. "One can study in any regional language. Our greatest pride will be when Tamil is made the link language in the country," the BJP president said. "I don't know Hindi. I don't know how many of us here know that language. We can learn Hindi for education, employment or other purposes, but it can't be imposed," the former IPS officer said.

"We want India to become the vishwaguru and Tamil Nadu to be the guru for the country," Mr Annamalai told reporters. He blamed the Congress regime for playing the language politics for over four decades. He said the Prime Minister approved the NEP after the Cabinet examined the final report making Hindi as optional language.

He welcomed popular film composer A R Rahman's remark that Tamil should be the link language and urged Chief Minister M K Stalin to write to his counterparts in all States asking them to encourage teaching Tamil in at least 10 schools in each State; and also agree to bear the expenses for the initiative.

"Tamil is our mother tongue and we cannot compromise on language issue. However, there is no restriction in learning any language," says Karu Nagarajan, BJP state general secretary. Home Minister Amit Shah has stated that Hindi could be an alternative to English and that Hindi could be the official language in the country.