Income Tax officers had on March 30 conducted searches at the premises owned by Durai Murugan in this district over suspected use of unaccounted money for electioneering and seized Rs 10.50 lakh of alleged "excess" cash. 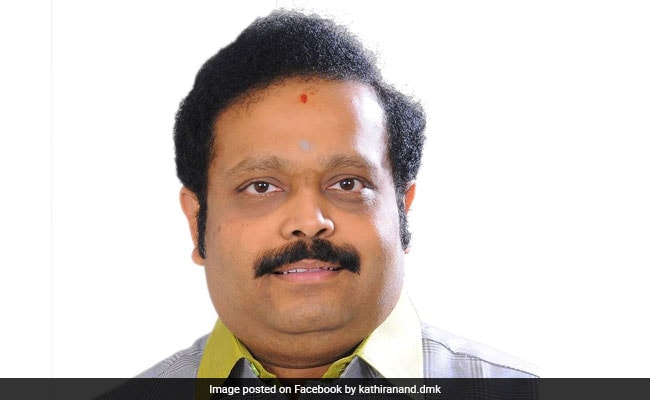 Police on Wednesday filed an FIR against DMK's Vellore candidate for the April 18 Lok Sabha polls and two others in connection with the Income Tax raids held in the district recently.

The FIR has been filed against DMK nominee DM Kathir Anand under the Representation of People Act for giving "wrong information" in his poll affidavit filed along with his nomination papers, police said without divulging details.

Police said FIR has been filed against two others, identified as Srinivasan and Damodaran, on "bribery" charges under the Indian Penal Code (IPC).

Income Tax officers had on March 30 conducted searches at the premises owned by Durai Murugan in this district over suspected use of unaccounted money for electioneering and seized Rs 10.50 lakh of alleged "excess" cash.

Two days later, the I-T officials said they had seized Rs 11.53 crore from a cement godown belonging to a DMK leader's associate in the same district.

Searches were conducted at Durai Murugan's residence, where some printouts with ward numbers written over them had been found, but the "main person", indicating the assessee, had dismissed them as "junk", I-T officials had said.

While a sum of Rs 19 lakh was found during the raid, Rs 10.50 lakh was seized as "excess" after allowing the cash declared in the election affidavit of Mr Anand, they said.

Durai Murugan had then said, "We did not conceal anything," adding that all his family members were income tax assessees.

He alleged the raids were a ''conspiracy'' by some political leaders who could not face them in the electoral arena and also questioned the timing of the searches in the midst of a full-fledged election campaign.