Chennai: Four people have been gored to death while watching and participating in Jallikattu or bull-taming in Tamil Nadu, but the political importance of the controversial tradition was driven home as both Chief Minister E Palaniswami and his deputy O Panneerselvam attended an event and offered brand new cars as gifts for the best performers. A teen spectator was gored to death while watching Jallikattu in Madurai yesterday; two more were gored to death today in Sivaganga and one in Tiruchirappalli.

Two gleaming cars splashed with stickers of the ruling AIADMK and former chief minister J Jayalalithaa were displayed on a platform near the Jallikattu arena, which was crammed with scores of AIADMK leaders.

The cars will go to the "best bull-tamer" and the owner of the "most outstanding bull". 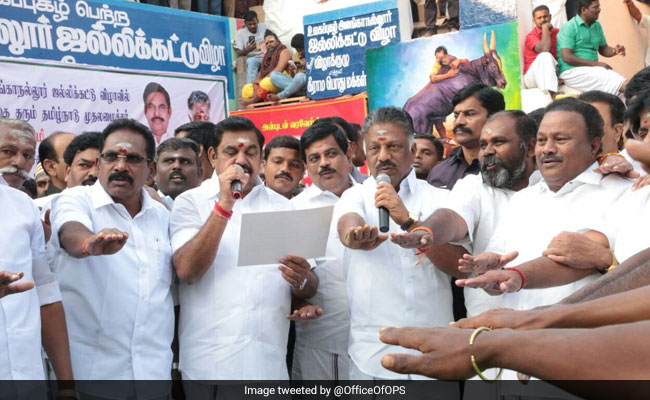 The Tamil Nadu government came out with new rules to skirt the Supreme Court ban on Jallikattu.

Not to be outdone, TTV Dhinakaran's camp, headed by the AIADMk's sidelined leader who recently won RK Nagar, the assembly seat previously held by J Jayalalithaa, has offered free air tickets to Singapore for the winners of the Jallikattu event at Madurai. The DMK was not far behind. On behalf of DMK leader MK Stalin, a couple of party legislators also offered gold rings for the winners.

The AIADMK is making sure people know who is responsible for Jallikattu's return last year after a Supreme Court ban. "It was our EPS' (E Palaniswami's) efforts as Chief Minister last year that made it possible to host Jallikattu, and they are honouring our leader Jayalalithaa," said Revenue Minister R B Udhayakumar.

After massive protests for days at Chennai's Marina Beach, the state government had come out with new rules to skirt the Supreme Court ban on Jallikattu.

Around 1,000 bulls and 1,200 bull-tamers registered to participate in today's edition. The grand prizes for the bull tamers and owners include two-wheelers, refrigerators, LED television, gold coins, couches and utensils. Mr Udhayakumar, who handed out gold coins to the winners, said: "It's an honour to give gifts for this symbol of Tamil pride".

He refused to reveal how much he spent on the gold. 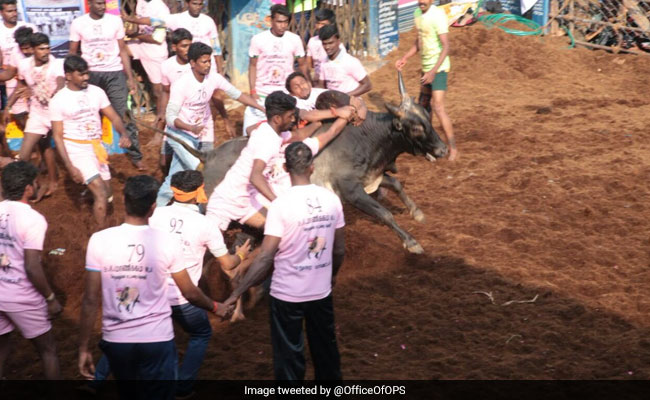 Around 1,000 bulls and 1,200 bull-tamers registered to participate in today's edition.

The tradition of young men wrestling with bulls, which marks the celebration of the harvest, is not just associated with Tamil pride but has also become a money-spinner over the years, with corporates pumping in big money. "The owner of each bull will get prizes worth at least Rs. 15,000," announced a member of the organising committee.

Animal rights activists allege cruelty continues in Jallikattu despite the state government's new rules. Bulls, they say, are made to wait for 15-20 hours without enough food or water, which stresses and traumatises them.

Promoted
Listen to the latest songs, only on JioSaavn.com
Bull-tamers, for the first time, took a no-cruelty pledge yesterday, but five tamers were still disqualified for clinging to the animal's horns, which is banned. Multiple tamers simultaneously pounced on bulls and pulled them by their tail, which is also banned by the Supreme Court.

"We are splitting the bull-tamers into groups of 100 and replace them every hour, so the bulls are not traumatised. We take every violation seriously and each invites disqualification. Veterinarians let only bulls that are fit and free from signs of cruelty and intoxication," said Collector Veera Raghava Rao.