K Annamalai was named as BJP's Tamil Nadu state unit president in place of L Murugan, who has joined Prime Minister Narendra Modi's government as a minister of state. 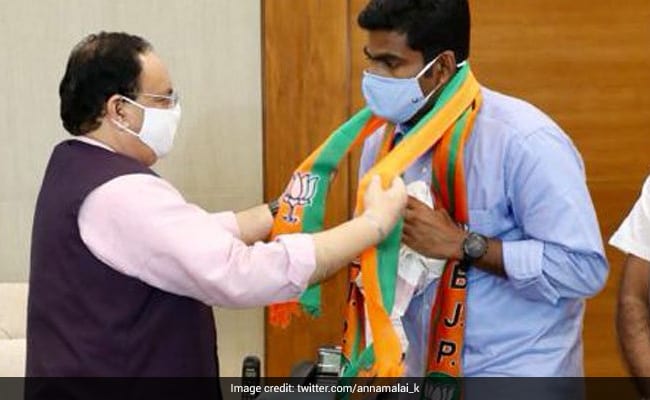 The Bharatiya Janata Party (BJP) has named K Annamalai, who quit the IPS to join politics, as its Tamil Nadu state unit president in place of L Murugan, who has joined Prime Minister Narendra Modi's government as a minister of state.

At 37, Annamalai Kuppusamy, is the youngest president Tamil Nadu BJP ever had and he is the first to rise to the position in the state unit within a year of joining the party.

Belonging to Karur district in the Kongu region of the state, he is from an agricultural family and belongs to the influential Gounder community.

Kongu belt in western Tamil Nadu is among the regions where the BJP has pockets of influence.

"We are confident that his appointment would strengthen the BJP and bring more and more young people towards politics with a nationalist vision," said ANS Prasad, BJP's state media wing chief.

With BJP ally AIADMK backing him, though Mr Annamalai aggressively campaigned in Aravakurichi constituency in his home district, he lost by a margin of 24,816 votes with DMK nominee R Elango emerging victorious.

An engineering graduate from a prestigious Coimbatore based college, he is also a product of Indian Institute of Management in Lucknow from where he completed his MBA degree.

The BJP has the convention of "one rank, one post", prompting the party leadership to name a new state unit chief after Murugan took oath as minister on Wednesday.

Mr Annamalai had launched a foundation to help students after quitting the Indian Police Service (IPS) and joined the BJP August last year. He is currently the vice-president of the party in Tamil Nadu.

A 2011 batch IPS officer of Karnataka cadre, he had been the police superintendent of Chikkamagaluru and Udupi districts and before he quit the police service in September 2019, he had also served as deputy police commissioner in Bengaluru (south).

The BJP is banking on the young leader to boost the party's standing in the Dravidian state where it has long been a minor player.