The Tiruvarur constituency fell vacant after the MLA representing the seat, DMK patriarch M Karunanidhi, passed away on August 7, 2018. 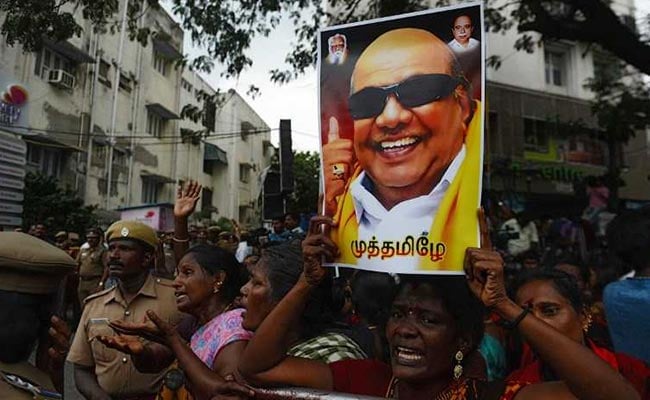 The Tiruvarur constituency was represented by DMK patriarch M Karunanidhi.

Bypolls to Tamil Nadu's Thiruvarur assembly constituency, which has been vacant since the death of DMK patriarch M Karunanidhi in August, have been cancelled. The state government and the Thiruvarur administration had appealed for deferment saying they were preoccupied with relief work after Cyclone Gaja.

The Election Commission has scrapped its January 3 notification announcing the by-election on January 28.

The Election Commission has written to the Chief Electoral Officer of Tamil Nadu cancelling its notification calling upon Thiruvarur to elect a member of the legislative assembly. According to the poll body, all actions taken by the Returning Officer and others of Thiruvarur Assembly constituency have been declared null and void.

All the major political parties in the state, the ruling AIADMK, DMK, Congress and CPM had demanded that the by-election be postponed as it would impact the cyclone Gaja relief work in the constituency.

Welcoming the Election Commission's decision, BJP's Tamil Nadu President Tamilisai Soundararajan said in a statement that the need of the hour in Thiruvarur was "relief and not election".

Taking a dig at the DMK, AMMK and others who had announced their candidates for the by-election, Mr Soundararajan said the parties that did not show alacrity in carrying out relief work were fastest in announcing their candidates.

Mr Soundararajan also criticised the CPI for filing a petition against the by-election in the Supreme Court while extending its support to the DMK candidate at the local level.

M Karunanidhi, who represented the constituency, died on August 7. A by-election to fill the seat has to be held within six months.