The government says relief has been given to large sections and is being deposited for others.

Not much has changed for many in delta areas devastated by Cyclone Gaja in Tamil Nadu, which uprooted 12 lakh trees and left 3 lakh homeless. The situation is so bad that their plight has turned into a fertile ground for trafficking and bonded labour.

At Surapallam in Thanjavur district, a badly-affected area, Chitra lost her husband Nataraian to Cyclone Gaja which hit Tamil Nadu coast on November 16 last year. But the suffering of the family was far from over. She says a money lender forcibly took away her younger son as bonded labour against an unpaid loan of Rs 60,000 that she had taken for the treatment and last rites of her farm labourer husband. The 10-year-old boy was rescued and is now in a children's home.

After the devastation of the cyclone, Chitra could not get a job and she has four children to look after. She told NDTV, "I could not repay the debt. That's why they took my son to look after goats. I need help to look after my children and get them educated."

60 kilometres away at Ambattan Kollai, another widow has been homeless since November. She has no money to rebuild her collapsed hut. She stands staring at the ruins every day. A few metres behind, after losing her hut, Rajathi lives in a make shift cattle shed where she could hardly stretch her legs. A few streets away, Vedanayaki is bed ridden with a metallic fixture on her left leg. When Gaja struck the coastal village, a tree fell on her and broke her leg. The leg's condition is worsening, but the family has no money for treatment. All these women say that no government relief has reached them yet.

"We have no other way. Only the government should help us. We don't have money to pay for a taxi to take me to hospital," Vedanayaki says. 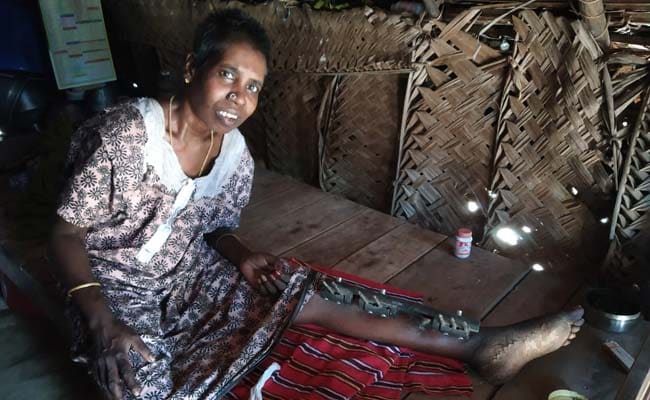 Rajathi, now homeless, said, "So far no one has come to see us or to ask us. We will not vote for anyone. Even if anyone comes to ask for votes we would say no votes."

Chitra reiterated "Neither the government nor the local president built our house. I sleep at my sister-in-law's house. My collapsed house remains that way."

At Vattatchi Kottai, another devastated area, farmer V Dhanavendan is shattered. The cyclone caused damages of around 80 lakhs to his coir fibre factory and uprooted 400 of his coconut trees. Many like him seek a special economic rehabilitation package.

"Economically we have gone backwards by 15 years. Our livelihood has been destroyed. We will be saved only of the government does something for us," Dhanavendhan said.

P Balasubramanian, a farmer-cum-advocate added, "Give loan to farmers without interest from cooperative societies."

However, the government says relief has been given to large sections and is being deposited for others. Though the government claims it would build one lakh free houses, no work has begun yet and hundreds are still homeless.