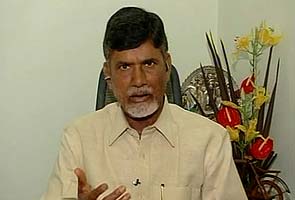 Hyderabad: Telugu Desam Party (TDP) president N. Chandrababu Naidu would go on indefinite fast in Delhi from Monday to demand the central government do justice to people of Seemandhra before taking any step to divide Andhra Pradesh.

The former chief minister told a press conference in Hyderabad on Friday evening that he would expose Congress, which is trying to use Telangana issue for political mileage.

Mr Naidu alleged that Congress was playing with the lives of people of Seemandhra by taking a decision to divide the state in an arbitrary manner without holding talks with leaders from both the regions.

He said Congress had only created more problems in the state instead of making sincere efforts to solve a sensitive issue.

He accused Congress party of having a 'match-fixing' with Telangana Rashtra Samithi (TRS) and YSR Congress. Mr Naidu pointed out that the leaders of Congress party themselves were making allegations of the "match-fixing".

Promoted
Listen to the latest songs, only on JioSaavn.com
The TDP chief claimed that bail to YSR Congress party Y.S. Jaganmohan Reddy in corruption case was part of the secret deal between two parties.