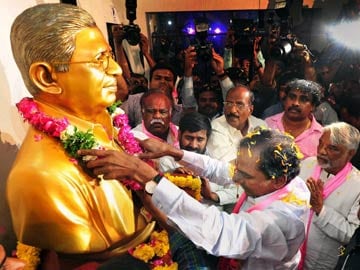 New Delhi: The Bill to carve out Telangana today received the assent of President Pranab Mukherjee who also signed the proclamation to impose central rule in Andhra Pradesh.

The Andhra Pradesh Reorganisation Bill 2014, which got Parliament's approval on February 20 despite strong opposition from Seemandhra leaders, got the Presidential assent, paving the way for creation of the country's 29th state by splitting Andhra Pradesh.

There will be 13 districts in residuary Andhra Pradesh while Telangana will have 10 districts, including the Hyderabad city.

In a bid to address concerns of the Seemandhra region, government had already announced grant of Special Category Status including tax incentives to the residuary state as part of a six-point development package for Andhra Pradesh's two successor states.

President Pranab Mukherjee gave his nod to place under suspended animation the Andhra Pradesh Assembly whose term is slated to end on June two.

The decision to impose the President's Rule in Andhra Pradesh was necessitated by N Kiran Kumar Reddy's resignation as the Chief Minister on February 19 as he was opposed to division of the state to carve out Telangana.

Governor E S L Narasimhan had recommended central rule in the state after the resignation.

Promoted
Listen to the latest songs, only on JioSaavn.com
The bill to create Telangana by splitting Andhra Pradesh was passed by Parliament on February 20 in the just-concluded Winter Session.

Will Continue To Work As Chief Minister For Next 2 Years: BS Yediyurappa