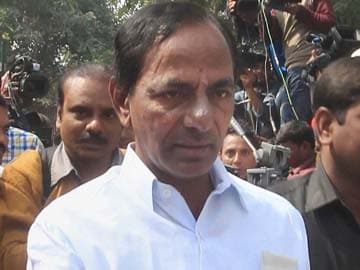 Hyderabad: At midnight, India got its 29th state in the form of Telangana, which has been carved out of Andhra Pradesh after decades of struggle. The supporters of the Telangana Rashtra Samithi (TRS), which has been at the forefront of the movement to create a separate Telangana state, have planned grand celebrations; the city of Hyderabad has turned pink, the colour of the TRS. (Complete Coverage | Live Blog)

The party has been rewarded with the mandate to form government and at 8:15 am on Monday, TRS chief K Chandrasekhar Rao will take oath as Telangana's first chief minister at the Raj Bhavan, possibly along with a 12 to 15 member cabinet.

The TRS won 62 of the 119 seats in the newly formed Telangana Assembly.  (Also read: Congress Heavyweights Lose in Telangana)

At about 10:15 am, he will unfurl the national flag at the Parade Grounds in Secunderabad and will make his first address as chief minister.

At noon, he will enter the Telangana state secretariat. C Block, which was occupied by the chief ministers of undivided Andhra Pradesh, will be his office.

The other half of the Secretariat has been allotted to Chandrababu Naidu, who will take over as the chief minister of the residual Andhra Pradesh made up of what is called Seemandhra, later this week.

KCR is expected to formally take charge at 12:52 pm. A first cabinet meeting will follow at which the chief minister will approve Telangana's new logo - one with the Kakatiya Gate and Charminar on it.

Files relating to loan waivers and compensation to martyrs will be taken up later.

Promoted
Listen to the latest songs, only on JioSaavn.com
"Lots of people sacrificed their lives, then and also now, for Telangana. Now the challenge for the new government of KCR is to take everyone along, so they feel they are a party to the development of Telangana," says 85-year-old N Laxminarayan Mudiraj, who as the mayor of Hyderabad had 44 years ago defied police orders to try and inaugurate a Martyrs' Memorial in honour of over 300 people who died in police firing during an agitation for Telangana in 1969.