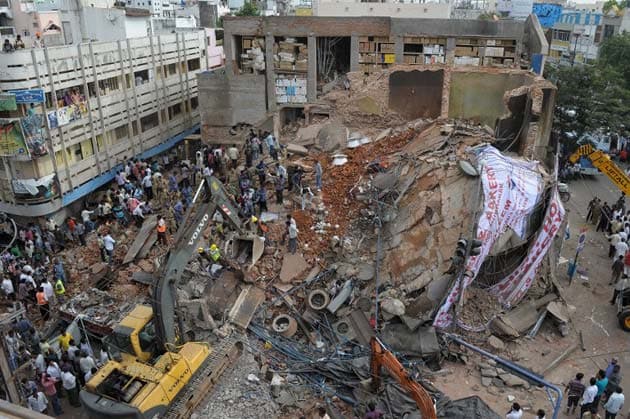 Secunderabad: 11 people were killed and 14 injured after an 80-year-old building collapsed in Secunderabad in Andhra Pradesh this morning. Many are still trapped under debris, including the son of the building's owner.

The 3-storey building of the Iranian City Light hotel collapsed at around 6:30 am. Rescue teams managed to pull out 10 people from the rubble but at least a dozen people could be still trapped. (Watch: rescue efforts after Secunderabad building collapse)

Civic authorities held the owner responsible, saying the building may have collapsed under the weight of bricks being transported to the first floor for installing ovens for Haleem, a popular dish cooked on slow fire. There were no concrete pillars to support the decades-old structure. (Pics)

Despite the structural weaknesses in the building, City Lights was not among the 57 buildings in the city that were recently issued notices on safety.

This was because the 'building looked fine from outside', the Greater Hyderabad Municipal Commissioner Krishna Babu told NDTV.

Promoted
Listen to the latest songs, only on JioSaavn.com
But City Planning Commissioner Raghu says in future, all buildings over 60 years old will be given notice for renovation.