Kiran Bedi stopped in front of every motorist seen without a helmet on a busy road in Puducherry as part of a campaign to mark National Road Safety Week. 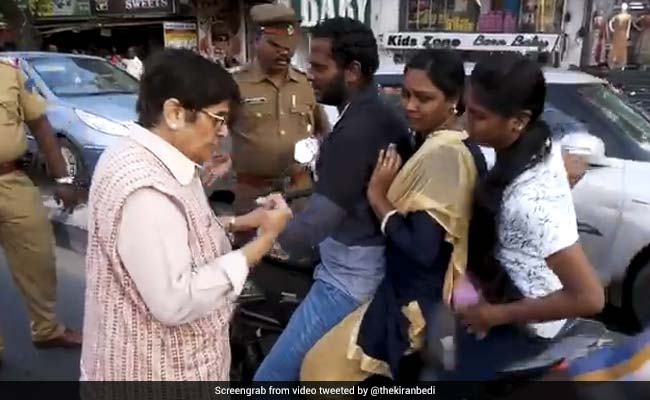 Kiran Bedi, the Lieutenant Governor of Puducherry, turned traffic cop on Sunday to raise awareness on road safety. During a campaign to mark National Road Safety Week, Ms Bedi stopped two-wheelers on a busy road in the Union Territory and asked bikers to wear helmets. She also took a swipe at the Puducherry government and said Chief Minister V Narayanasamy is stopping the enforcement of road safety rules.

A video shared by her on Twitter shows her stopping a man, who was driving a motorcycle with a woman and two children, the girl riding pillion and the boy seated in front of him. "All four will fall," Ms Bedi told the man.

Ms Bedi, a former IPS officer who was in charge of traffic in Delhi, made her way through the busy road connecting Puducherry and Viluppuram district. She stopped in front of every motorist seen without a helmet. She also instructed a traffic policeman to "talk to them one by one".

"Where's your helmet?" she could be seen asking each of the motorists as they slowed down on seeing the Lieutenant Governor on the street.

When there's no culture of wearing a helmet in Puducherry and its CM keeps stalling enforcement & every 3rd day there's a fatal accident, due to non wearing of a helmet,where does one begin?Giveup or take it in one's own hands as well,alongside challenging enforcement agencies? pic.twitter.com/VQAUbYgUdU

A man with two women riding pillion was stopped and the women were made to get off the bike by a policeman.

The Lieutenant Governor also spotted an overcrowded auto-rickshaw and warned its driver, besides asking one of the passengers to get off.

The National Road Safety Week was celebrated in the country between February 4 and February 10.

In December last year, Ms Bedi drove through Puducherry in a private car "incognito" and found lapses in traffic management.

Kiran Bedi was known to be stickler for rules when she was a police officer. She was often referred to as "Crane Bedi", a name she earned from towing away then Prime Minster Indira Gandhi's car in the call of duty in 1982.

Kiran Bedi, has been at loggerheads with the Puducherry government on various issues. Mr Narayanasamy and the Congress have accused her of delaying clearance to welfare schemes, bypassing the elected government and criticised her weekly field visits.