Kiran Bedi had in October this year conceded that she has "failed" in effectively managing the chaotic traffic in the union territory. 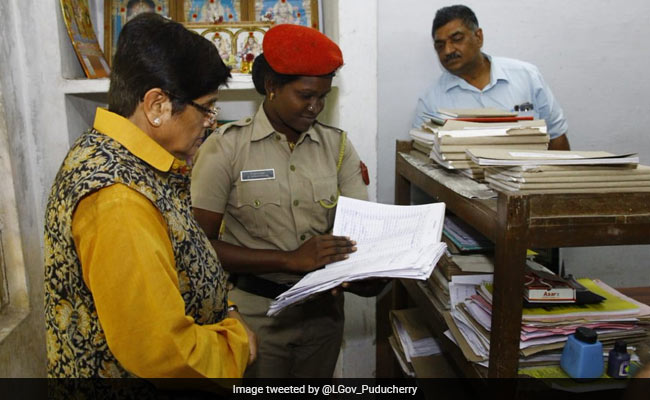 Puducherry Lt Governor Kiran Bedi, a former IPS officer known as a stickler for rules, Tuesday drove through the town in a private car "incognito" and found "numerous lapses" in traffic management.

Appalled at the deficiencies in traffic regulation, Ms Bedi, who circulated a message on her findings supported by pictures she clicked, said she issued a verbal warning to police officers after summoning them for a meeting at her office.

Ms Bedi had in October this year conceded that she has "failed" in effectively managing the chaotic traffic in the union territory.

Went incognito in a private car to see traffic managment. And this what was found. pic.twitter.com/5cFacPAC6k

In a Whatsapp message to the media Tuesday, Ms Bedi said she was "compelled to take the road incognito" to see traffic regulation.

"Traffic regulation and management was found to be wanting in several respects and there were serious flaws in the task of regulation of traffic," she said adding traffic signal lights were also not properly functioning.

She also noted that traffic police personnel were not found on many thoroughfares and at some places they were either on the side of the road or with their back to traffic.

The former IPS officer said she also did not see any senior officer patrolling or on the move.

Ms Bedi also said she would keep making such incognito visits to check traffic management and other issues.