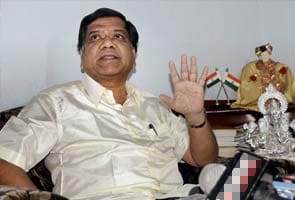 Prior to the meeting, the Governor had made it clear that he could call for a trust vote, if necessary.

"If there is a need, I will ask the government to prove its majority. We are reading the situation," Mr Bharadwaj said.

Mr Shettar's visit to Raj Bhavan today was aimed at explaining to Mr Bharadwaj that his government is safe on numbers even if the resignation of the 13 rebels is accepted. The two ministers, whose resignation was accepted today, and are expected to join the Karnataka Janata Party or KJP launched by Mr Yeddyurappa last month after he stomped out of the BJP, his party of 40 years.

The effective strength of the Karnataka Assembly is 223, down from 225, since Mr Yeddyurappa and another MLA Srinivas Halappa quit last year. The BJP now has 117 members, including the Speaker. It is also counting on the support of most of the seven Independents in the House and so, Mr Shettar reckons, the resignation of the 13 pro-Yeddyurappa MLAs, if accepted, will not endanger his government.

But the Yeddyurappa camp claims there are four more MLAs waiting to resign. If the number of rebels goes up from 13 to 18, the Shettar government will be skating on very thin ice.

The Budget session of the Karnataka Assembly is scheduled to begin on February 4; Mr Shettar is expected to make his maiden Budget speech on February 8. If the Governor does ask the state government to prove majority on the floor of the House in a Confidence vote, he will have to do so before February 8.

The legislators who want to quit have complained that the BJP is using the absence of the Speaker KG Bopaiah - he is away on a naturopathy tour - as a ruse to hold them back. Resignations can neither be accepted nor rejected in Mr Bopaiahs' absence, a move Mr Shettar's detractors allege has been carefully orchestrated by the BJP. The rebel MLAs have emailed their resignation letters to the Speaker and then met the Governor to seek his intervention.

Many see the newest Karnataka BJP crisis as a move by the dissidents to embarrass the party and the chief minister ahead of the Budget Session, an old Yeddyurappa ploy. Mr Yeddyurappa quit the BJP after a long and public battle with the party over its refusal to confer an important post on him. He was forced to resign as chief minister in July 2011 after he was indicted for corruption in a report on illegal mining. Mr Yeddyurappa has also been accused in a series of cases of misusing his term as chief minister for sweetheart land deals for his family.

Promoted
Listen to the latest songs, only on JioSaavn.com
Karnataka votes for a new government this year.

In 2007, Mr Yeddyurappa, a powerful Lingayat leader, had won the BJP its first government in the South. The party is struggling hard to hold on to it.