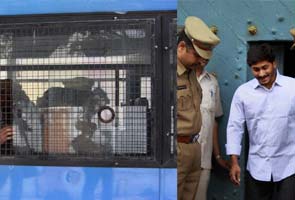 Hyderabad: The special Central Bureau of Investigation or CBI court in Hyderabad today extended to August 26 the judicial remand of YSR Congress president YS Jagan Mohan Reddy and other accused in the case pertaining to 'quid pro quo' deals.

The case relates to alleged investments made by private firms and individual investors in Mr Reddy's companies as a quid pro quo for government favours when his father, late YS Rajasekhara Reddy, was Andhra Pradesh Chief Minister.

Mr Reddy was arrested by the CBI on May 27 last year.

Promoted
Listen to the latest songs, only on JioSaavn.com
The court also extended the judicial custody of former Karnataka minister Gali Janardhan Reddy and others in the OMC illegal mining case till August 26. They too appeared through video-conference from the Chanchalguda jail.

The court also sought medical certificate of suspended IAS officer Y Srilakshmi, an accused in OMC case, who is not attending the proceedings citing ill-health.