Do Not Rename Rajiv Gandhi Airport in Hyderabad, Shouts Congress 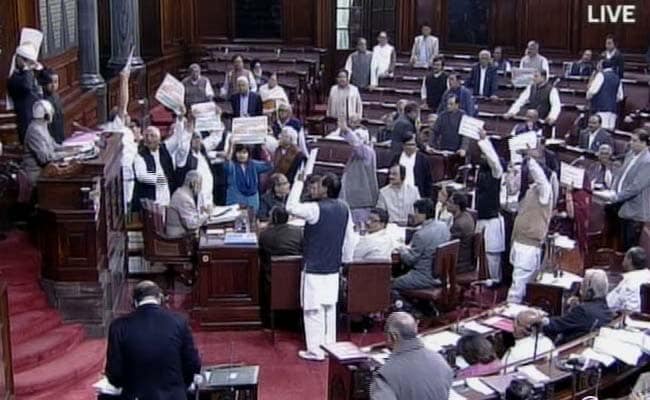 New Delhi: The Congress in Parliament angrily protested a decision to remove the name of its leader Rajiv Gandhi from a part of the airport in Hyderabad. The Rajiv Gandhi International Airport consists of one building.

Last week, the union government had said that a section of the airport will be renamed the NT Rama Rao Domestic Terminal after the politician who founded the Telugu Desam Party or TDP which is now in power in Andhra Pradesh and a member of the PM's coalition government.

Congress members of the Rajya Sabha today shouted slogans against the move and carried placards into the well of the House, the area near the Vice Chairman that is off-limits for law-makers. The protest forced two adjournments of the house.

The Congress has also said it will challenge the renaming of the airport in court.

The Congress was voted out of power in Andhra Pradesh in May, where the state and parliamentary elections were held simultaneously.

Rajiv Gandhi, who served as Prime Minister, was assassinated in Tamil Nadu in 1991. His widow Sonia and son Rahul are the top two leaders of the Congress.

Promoted
Listen to the latest songs, only on JioSaavn.com
Andhra Pradesh was bifurcated in June to carve out the region of Telangana as its own state. Telangana Chief Minister K Chandrasekhar Rao has said that it doesn't make sense for one airport to have two differently-named sections.